The affinity between streptavidin and biotin is one of the strongest non-covalent interactions known in nature. It is extremely specific and is unperturbed by extreme changes in temperature, pH, and detergent. It is therefore a very useful tool in biotechnology. For example, the system is commonly used in magnetic separation. Target molecules are biotinylated, which means that a biotin molecule is covalently attached to the protein, nucleic acid, or other molecule of interest. Streptavidin-bound magnetic particles are incubated with a solution containing the biotinylated target molecule for a sufficient time for the streptavidin-biotin affinity to form. The complexes can then be isolated from solution by magnetic separation.

Streptavidin magnetic beads are highly effective, but can be expensive. It could be beneficial to develop an alternative technology to capture biotinylated molecules. To do this one must first understand why the affinity between streptavidin and biotin is so strong. The answer lies in the binding pocket of streptavidin. The pocket is shaped to perfectly match biotin. Many hydrogen bonds form between specific amino acid residues when biotin is in the binding site. Additionally, the site is hydrophobic and van-der-Waals forces help to hold the biotin in place. The affinity is due to the complementary fit between biotin and the binding pocket. The affinity can be replicated by synthesizing a molecularly imprinted polymer (MIP) with a binding pocket for biotin.

A magnetic molecularly imprinted polymer (MIP) with a specificity for biotin

A MIP with specificity to biotin is created by crosslinking a polymer in the presence of biotin. The polymer starts out in a liquid-like state and can completely cover the biotin. As the polymer crosslinks it retains a cavity that perfectly matches biotin with high specificity.

Cores of magnetite are covered with shells of this MIP with biotin-specific cavities. When the MIPs were tested for biotin affinity they were found to be sufficient. Though not as strong as that between streptavidin and biotin, the MIP-biotin affinity was good enough to bind to biotin.

The affinity was characterized by four different assays:

Light was detected in the magnetically isolated solution in each assay described above. This indicates that the MIP does indeed have affinity for biotin. It could be used in biosensors and microfluidic devices for the detection of many targets. The benefits of the magnetic MIP compared to streptavidin magnetic particles are that it is easily and affordably synthesized in large batches, doesn’t need animals to generate antibodies, and the polymer itself has high chemical and mechanical stability.
Why do magnetic beads move faster than expected?

The success of magnetic bead separation technology comes from its simplicity. Magnetic beads capture biomolecules and then they are extracted from the suspension. No filters are needed, there are no disposables, and there are no moving parts. 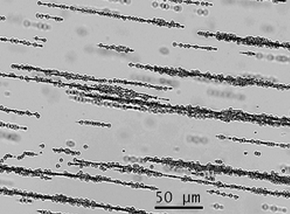 The speed of separation, usually on the order of seconds for small volumes and minutes for large volumes, is fast compared to other separation techniques.

Since the speed of separation is fast when using traditional magnetic bead separation techniques, not much attention is typically paid to the details of bead movement. Even though separation conditions are not homogeneous and not well parameterized, the results are generally satisfactory for what is needed. However, as soon as batch volume increases using traditional methods, reproducibility problems become a serious issue.

Apparently, volume matters for non-homogenous separators. On the other hand, newer biomagnetic separation devices should allow one to predict results with a great deal of accuracy. These devices have homogeneous and well parameterized conditions with constant magnetic force applied to each and every bead. For any bead, its velocity can be calculated by using the following formula:

This formula considers the competition between the magnetic force and viscosity for each bead. Even so, experimental data consistently shows that bead movement is much faster than this formula predicts. What typically occurs is that the separation speed increases as the concentration of the magnetic beads increases, resulting in a shorter separation time than estimated.

What can explain this discrepancy?

In the presence of a magnetic field each bead is magnetized and acts as a tiny magnet. Each tiny bead magnet interacts with its neighbor. These interactions cause large chains of beads to form. These chains are similar in behavior to larger beads which move much faster along the magnetic field gradient than small, single beads.  Therefore, when the magnetic interaction between beads is larger than thermal agitation, the beads always move faster than predicted by the above formula, a formula that is meant to calculate the speed of isolated particles and not long chains of beads.