One solution is to find a bigger magnet. As the magnetic force decreases very fast with the distances, is not easy (and sometimes impossible) to allow the particle farthest away to feel a sufficient magnetic force. Even so, the particles closest to the magnet will experience an extremely large magnetic force. In cell separation protocols this can be detrimental to the cells because the high magnetic force can destroy the membrane and cause cell death. This is less of a concern in DNA purification because there are no live cells to worry about, but the separation efficiency is still compromised by the irreversible aggregation of magnetic particles closest to the retention area.  Additionally, the separation time can be painfully long due to uneven forces throughout the working volume.

Advanced biomagnetic separation systems are engineered to produce a constant magnetic force throughout the working volume. This means that the magnetic force felt by a magnetic particle does not vary greatly with location. Ideally, all particles within the sample will experience a comparable magnetic force. This translates to faster separation times and greater separation efficiency because all of the particles will experience an optimal magnetic force. All particles are captured within a comparable time-scale because there are no particles left behind, and irreversible aggregation of particles is avoided since it is not necessary to increase retention force to capture the farthest beads. These advanced biomagnetic separation systems are carefully designed with optimized geometry, magnetic field strength, shape, and gradient. They are also equipped with real-time quantitative software that provides optical monitoring of the separation process. This software provides the additional benefit of standard curves to compare separation efficiency across experiments, which is critical when optimizing a new separation protocol. Also, this added feature takes the guesswork out of the separation process. It is easy to see when the separation is complete, and a typical separation requires only a few short minutes. 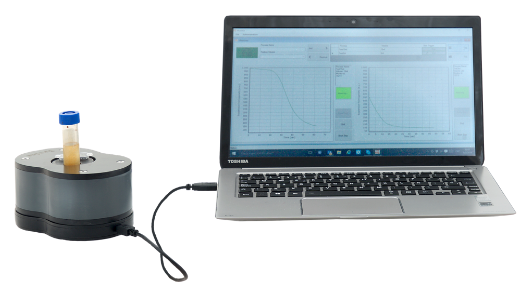