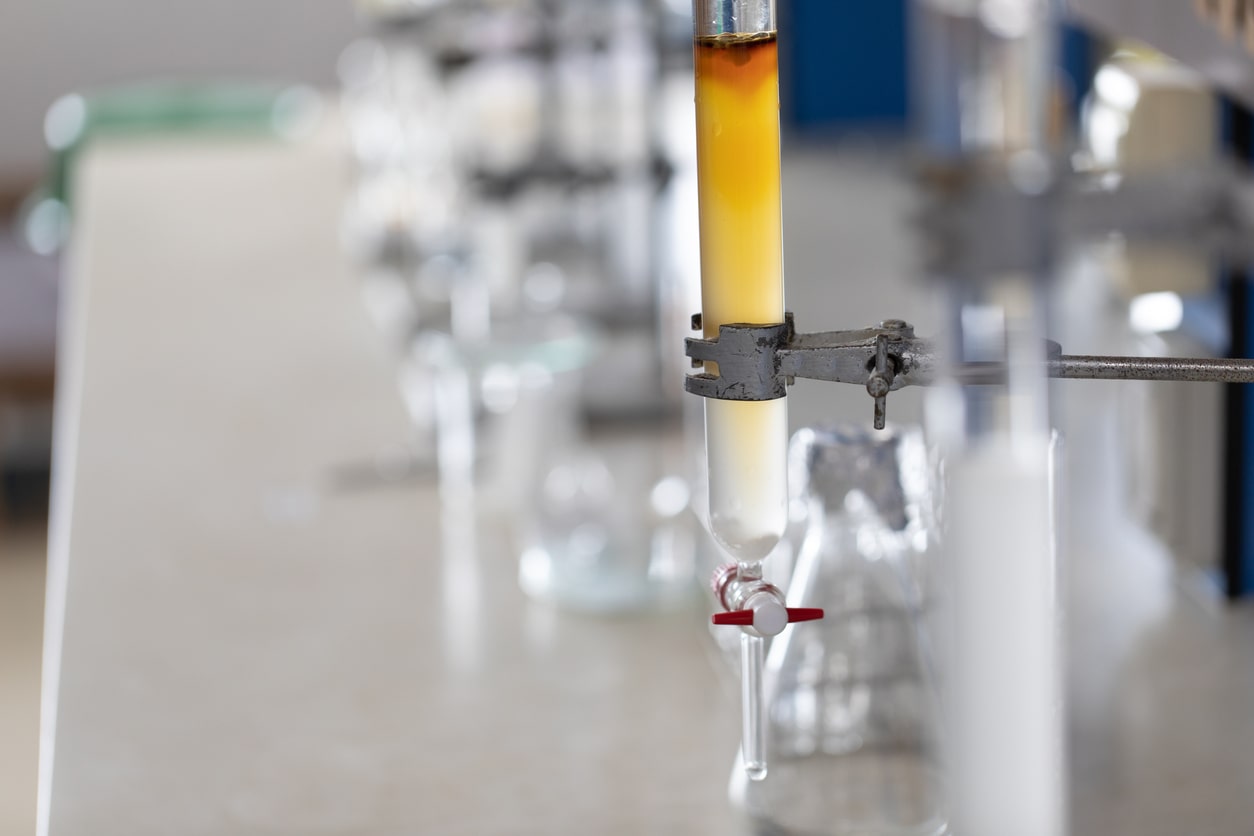 Affinity Chromatography and column purification of proteins and nucleic acids

Column chromatography is a method used in many areas of science to isolate a single compound from a mixture. The basic principle of column chromatography is the adsorption of target to the column by designing a column with specific affinity to the target. The target compound adsorbs to the column resin while the remaining mixture easily flow through the column and out the other end. A similar method is used to purify protein and nucleic acids, and it is generally referred to as affinity chromatography. Affinity chromatography requires a solid support (typically a magnetic bead or a resin column) on which to covalently attach a capture molecule which has affinity to the target protein or nucleic acid.

The two main solid support systems for performing affinity chromatography are magnetic beads and resin columns. Column purification is the most traditional method, and there are many different materials used. The main requirement for the resin material is to have accessible functional groups for chemical attachment of the capture molecule. If the capture molecule is a protein, then it will likely be covalently attached to the column resin via amine or carboxyl groups.

Therefore, common materials include agarose, dextran, cellulose, and polyacrylamide. The idea is to choose something that is easy to modify chemically, but also has low non-specific binding to avoid adsorption of unwanted contaminants. For column purification of DNA or RNA, the strategy depends on the level of specificity desired. If the goal is simply to capture all DNA from a sample, then a silica column is used to adsorb DNA. If the target is a specific sequence, then the complementary strand can be attached to the column via biotin-streptavidin binding and only the target strand will be captured. These strategies are also used for magnetic bead affinity purification. The difference between the column and magnetic bead methods is the principle behind the recovery of target.

Many commercial purification kits come with pre-made columns. These columns can be dry resin or can be a wet colloidal resin mixture. The colloidal mixture often needs to be centrifuged prior to use in order to pack it into an ideal density which will allow sample to flow through and target to bind efficiently. It is also possible to make homemade columns by preparing a colloidal resin mixture and selecting the optimal particle size and material composition. The particle size is important to ensure that optimal binding sites are available to capture target while also allowing the sample and contaminants to  flow through the column and out. This is very important during washing. The final step, elution, involves the addition of an elution buffer that breaks the affinity between capture molecule and target. These buffers often have high salt concentrations or drastic changes in pH. Centrifugation is often used during all four steps of column purification in order to speed the flow of liquid through the resin and to decrease total working time.

Affinity purification using magnetic beads can improve the efficiency and speed of the purification process and can improve the target yield. With a well designed separation rack, the target molecule conjugated to the magnetic beads can be recovered in a matter of minutes. This process requires fewer washes than column purification, and can potentially result in less non-specific binding because the sample doesn’t have to move through a whole resin-packed column.

There are many materials, attachment chemistries, commercial kits, affinity pairs, and purification procedures available for the capture of a variety of target molecules. The method choice is dependent on the experimental goals and what can easily be implemented to produce the best result.

For example, the company Cytiva makes both magnetic bead based and regular sepharose immobilized metal ion affinity chromatography (IMAC) media. This media can be used to purify a protein of interest from a solution. To capture a protein of interest, a plasmid containing the protein and an adjacent his-tag (at least 6 his residues) is transformed into a host cell. Cells are grown and the protein is made by the cells. Cells are then lysed using one of several lysis options you can read about in our article how to lyse cells. Your sample will contain all your cell contents in a lysis buffer. The Cytiva purification media, His Mag sepharose excel and Ni Sepharose excel, are particularly advantageous in that they are resistant to problems associated with lysate solutions. They do not go through as much metal ion stripping due to tight binding of ions by the media. This can simplify purification workflow by allowing for direct loading of the sample onto a purification column without steps to exchange buffers.