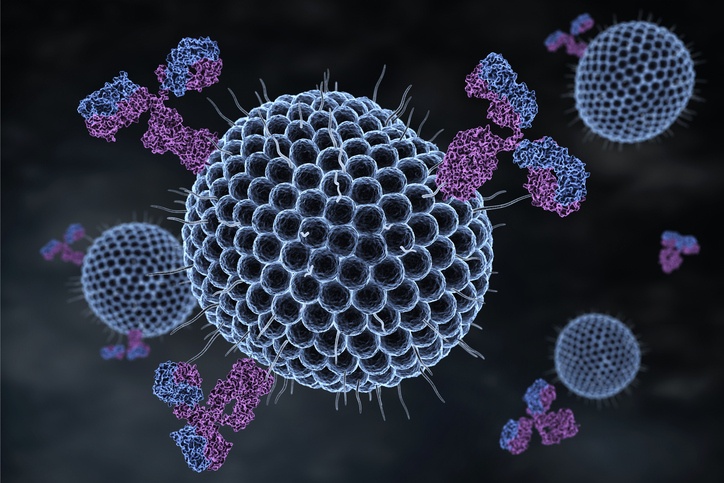 The concept of an antigen and antibody pair is central to modern medicine and biotechnology. These proteins match like a lock and key, with equisite specificity. The interactions are non-covalent, but have equilibrium constants ranging from 105 to 1012 M-1 Antibodies and antigens are proteins: polypeptide chains of amino acids. The IgG antibody is composed of four polypeptide chains, two heavy and two light, organized into a ‘Y’ shape. The base of the Y is called the Fc region, while the two tips are known as the Fab region.

The Fab region has antigen recognition sites that are thought of as variable sites. When the immune system encounters an invading pathogen, it reads the identifying antigen of that pathogen and modifies the variable site of an antibody sequence to enable the lock and key recognition between the two. Multiple copies of this antibody are then generated and released into the system in order to perform their duty of binding the epitope on the unique antigen of the invading pathogen. Once identified, these invaders are engulfed by macrophages and destroyed by the host immune system. The same process can happen in autoimmune diseases, where the immune systems mistakenly identifies ‘self’ proteins as ‘foreign’ proteins, and generates antibodies against them.

Antigens and antibodies in biotechnology

While autoimmune diseases are quickly becoming one of the greatest challenges of modern medicine, this antigen and antibody relationship is moving to the forefront of cutting edge sensor development and in-vitro diagnostics. In particular, antibodies are frequently conjugated to solid support systems such as resin, beads, or even silicon chip-based photonic sensing devices, the later of which rely on sub-nanometer changes in resonance frequency corresponding to antigen detection. Older biosensing techniques rely on fluorescent, chemical, or chemiluminescent tags for antigen detection, but the newest techniques demonstrate that the future of biosensing will be label-free and may offer an unprecedented opportunity for rapid and highly sensitive multiplex measurements.

Light-based biosensing with antigens and antibodies

One established technique is SPR (surface plasmon resonance) wherein antibodies are covalently conjugated to a gold sensor chip. Light is reflected off of the chip at a defined angle. If the matching antigen of the antigen and antibody pair is present in the sample, then the antigen will bind to the antibody. This binding event changes the effective refractive index of the chip surface, which changes the way that light interacts with the surface, and fundamentally alters the resonance frequency of the surface plasmon generated at the surface of the gold chip. The antigen binding event is measured as a change in resonance frequency. This concept of resonance frequency is turning out to be fundamental to the development of microfluidic, microring, lab-on-a-chip biosensors. The explosion in silicon electronics over the past 20 years has paved the way for silicon photonics. The manufacturing techniques used in the electronics industry are being adapted for light-based biosensors. The specificity of the antigen and antibody interaction will play a central role in the development this next generation of in-vitro diagnostic devices.