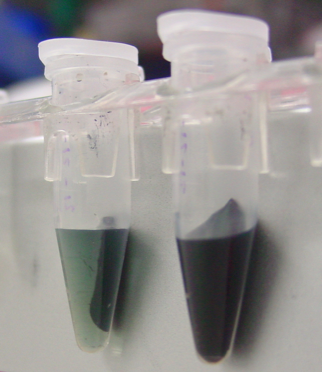 Protein purification using magnetic particles is well established in life science R&D but has not reached commercial acceptance for larger scale applications in bioprocessing. Preparative scale purification of antibodies using magnetic beads is far more time efficient, however existing column chromatography methods are significantly cheaper. To be competitive, the main challenges that need to be addressed for magnetic separations are:

If these challenges can be addressed, then antibody purification, as well as other applications in biotechnology and other industries with challenging separation issues, e.g., water treatment, become far more realisable.

Every magnetic particle currently being used requires the coating of iron oxide nanoparticles (magnetite) with a polymer casing to achieve various desirable characteristics including the ability to efficiently bind protein or other ligands onto its surface. The manufacturing process often requires multiple steps and achieving reproducibility and consistency of performance from large scale production batches is not trivial when dealing with micron and sub-micron particles. Consequently, magnetic particles retail in the order of $1000 per gram, with some suppliers being dramatically more expensive.

Figure 1. Mix&Go activated superparamagnetic nanoparticles (magnetite) (left) form a pellet in a magnetic field at a faster rate than unmodified particles (right). The picture was taken after placing the suspended particles on magnetic rack for 5 secs.

Anteo avoids the need for multiple coatings by directly coating the magnetite with a metal polymer-based surface chemistry called Mix&GoTM. The starting advantages are costs (magnetite nanoparticles retail around $10 per gram) and ease of use as only a single one-step water based addition is required to produce stable and active magnetic particle for protein binding. The procedure is simple and consists of adding sonicated magnetite to a Mix&Go solution and stirring for an hour. Scale up issues should be trivial even at multi-kg and higher scales.

Dimensions of the starting magnetite determine the final Mix&Go activated nanoparticle dimensions. By zetasizer, the initial dimensions of the magnetite averaged 102 nm, and on MixGo activation, increased to 110 nm. These Mix&Go activated particles have good colloidal stability in their activated form as well as during the subsequent protein ligand coupling step. Interestingly, Mix&Go activation leads to improved bead pellet formation under a magnetic field compared to the unmodified particles (Fig 2). The handling characteristics are comparable to other magnetic beads commonly used in life sciences research. 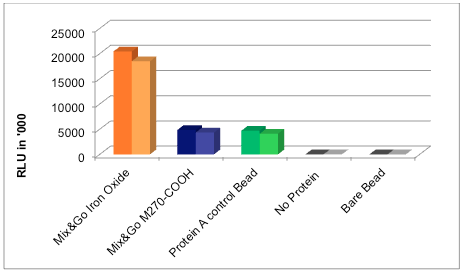 Mix&Go modifies surfaces to gently bind proteins with minimal damage to their function. The benefits that have been observed on other larger particles seem to also translate well to these small nanoparticles. See Anteo’s website for more information.

Using Mix&Go, it is possible to produce fully functional magnetic particles ready for Protein A binding with far higher binding capacity at approximately 100 times lower cost than with existing magnetic particles.  In addition, Protein A coupling is a simple one-step procedure.  Use of Mix&Go’s aqueous base chemistry greatly simplifies large scale manufacturing with tight batch reproducibility. While Protein A and many other factors contribute to bioprocessing costs, we believe it is possible to decrease magnetic bioprocessing costs to match or even undercut costs of current column chromatography methods. 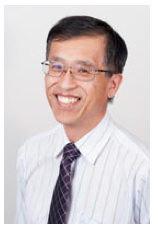 Joe’s area of interests has been on the commercialisation of products and technologies at the interface of chemistry and biology for over 20 years.

Joe was a co-founder of the company that became Anteo Diagnostics as well as its founding CEO. Previously, he held senior management positions at Mimotopes Pty Ltd, Melbourne, Australia and at Chiron Corporation, San Francisco, USA.  He holds a BSc in chemistry from University of Queensland, Australia, MPhil in enzymology from Griffith University, Australia and PhD in Polymer Engineering from the Tokyo Institute of Technology, Japan.