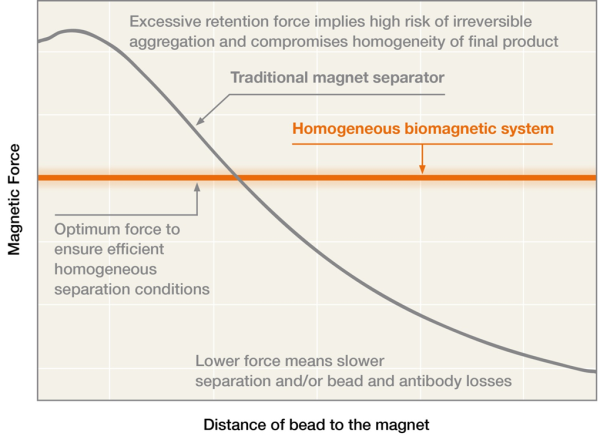 In-lot consistency is the key to reproducibility at the level of a kit. Unfortunately, in non-homogenous systems irreversible aggregation is one of the main sources of in-lot variability. If all of the beads are exposed to the same force as they are in homogenous magnetic systems, the risk of aggregation is greatly reduced. Because of this, it is important to know how to avoid irreversible aggregation problems during a magnetic separation process.

The problem with standard magnetic separators

Standard magnetic separators generate field profiles that always lead to forces that vary with distance. Therefore, magnetic beads far from the retention area experience very low forces and need longer times exposed to the forces in order to be separated. Magnetic beads that start near the retention position experience large forces for long periods of time during this separation period. High forces over long exposure times lead to a high risk of irreversible aggregation which results in substantial in-lot inconsistency.

In large volumes technicians and scientists can attempt to disaggregate beads that have aggregated during the separation process by using the sonication method as part of the resuspension protocol. Unfortunately, as volumes increase, disaggregation becomes more complex and less efficient. When testing beads functionally after separation, beads that were aggregated or are still aggregated perform very differently than beads that have never aggregated. As a consequence, different aliquots from the lot such as those in single kits can be functionally inconsistent.

How do we solve the dissagregation problem in magnetic beads separation?

Homogenous biomagnetic separation systems such as SEPMAG systems apply the same force over all of the beads, regardless of where they are in the vessel. Since the forces on the farther beads are higher than in classic separators at long distances, the farthest beads separate quickly and the separation time is short. In the retention area, the force is large enough to retain the beads, but since it is constant relative to distance from the magnet, it can be lower than in standard inhomogeneous devices. Therefore, moderate forces over a short exposure time leads to no risk of aggregation and a guarantee of substantial in-lot consistency.