The 5 Most Used Resuspension Methods: What Works and What Doesn't

Resuspension of the magnetic beads is the key to guaranteeing both in lot and lot to lot consistency of the resulting in vitro diagnostic (IVD) magnetic bead reagents. In order to achieve resuspension of solids with liquids, scientists and technicians in the lab typically use five different general techniques:

This technique can be used with high volumes. People often put these large volumes in a cylindrical bottle and place them on an assembly consisting of rubber rolling cylinders. Scientists can maintain their bead suspension sometimes for years in this manner.

Vortexing is normally used when one has a small tube with the reagent to be resuspended, as this method is only suitable for small volumes. They hold the tube against a rubber surface that is shaking at varying speeds and the content of the tube will shake as well. This can only be used with small tubes.

This technique is used with large bottles and bioreactors. An agitator is placed through the top of the bottle into the liquid and a motor continually moves the agitator to keep the beads in solution.  This is a very popular technique to use with bioreactors.

Another way to maintain a suspension or resuspend solids is to place a magnetic bar in the solution and place the bottle or flask on top of a stirring device. The stirring device also generates a magnetic field that rotates at varying speed and will cause the bar inside the liquid to spin at the same speed.

The first four methods are mixing and homogenization methods, but none of them generate enough energy to pull aggregate beads apart from each other. Sonication, although complex and difficult to master at large volumes, can break the aggregates apart.

Since this technology works with magnetic beads, scientists and technicians are forced to use non-magnetic materials for any resuspension method of choice. Magnetic materials are not used in vortexing and rolling equipment. However overhead mixers and sonicators sometimes include materials that are magnetic. This issue can be addressed by using non-magnetic stainless steel or other material that does not interfere with magnetic bead separation. 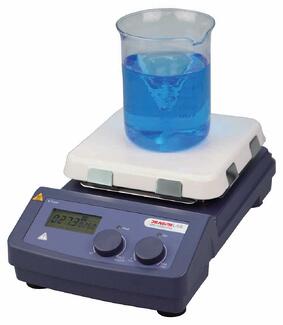 Magnetic stirring, by its very nature, should be discarded as a viable process. The stirrer used in the process is usually a ferrite magnet or some other magnetic material that would attract the magnetic beads and ultimately cause the formation of clumps and aggregates. A certain percentage of magnetic beads and their attached biomolecules remains attached to the stirrer generating variable losses from batch to batch that are difficult to quantify.

Moreover, the intense external magnetic fields necessary to rotate the stir bar exposes the beads to additional uncontrolled dynamics making it even more difficult to parameterize and validate production processes.