How a magnetic separation rack works

Magnetic beads and particles can be coated with specific affinity ligands for antigens, antibodies, catalyzers, proteins or nucleic acids. After being incubated with the suspension for a time, the vessel is introduced in a magnetic separation rack. The beads (and attached biomolecules) are attracted and retained by the magnetic force. Once separation is complete, the supernatant, which is not affected by the magnetic fields, can easily be removed. The biomolecule, attached to the magnetic beads, is already isolated from the original media and it can be eluted, if necessary.

There is copious reference material available on the subject of magnetic beads and how their characteristics (diameter, density, magnetic pigment content, surface activation) affect the efficiency of the process. It is because of this that when problems appear, i.e. high losses, slow separation, inconsistent results, clump formation, the focus tends to be on the magnetic beads themselves. Much time and money are spent analyzing bead size distribution and magnetic properties, testing alternative products/suppliers and reviewing coating and incubation protocols. This is often a waste of time and, as deadlines draw close and cumulated investments are put in jeopardy, relationships with providers, colleagues and management can become strained.

A simple magnetic separation rack is a straightforward piece of permanent magnet. Calculating the value of a magnetic field in each point in space and then determining the gradient is not too complex. The graph shows the results as we move away from the center of the surface of the magnet. In the best case scenario (assuming the magnetic beads are always saturated) the magnetic force changes very quickly according to the distance from the surface. When different magnet sizes are compared, it may seem surprising that small magnets generate ber forces near the surface than larger ones, but this is because the larger the magnet, the more constant the magnetic field and, as we have just learned, a constant magnetic field does not generate force.

Some magnetic separation devices try to get around this by using two permanent magnets with opposite polarity. This means that the field is never constant near the center of the assembly and that there are greater forces near the permanent magnet surface where we want the magnetic beads to be at the end of the process.

However, the resulting magnetic force is extremely uneven, that is to say its value changes quickly with distance, which means that the force exerted on the beads closer to the magnet is very strong, while the force on the beads farther away from the surfaces of the magnet is very weak. This force profile has two undesired practical drawbacks on magnetic bead separation process: 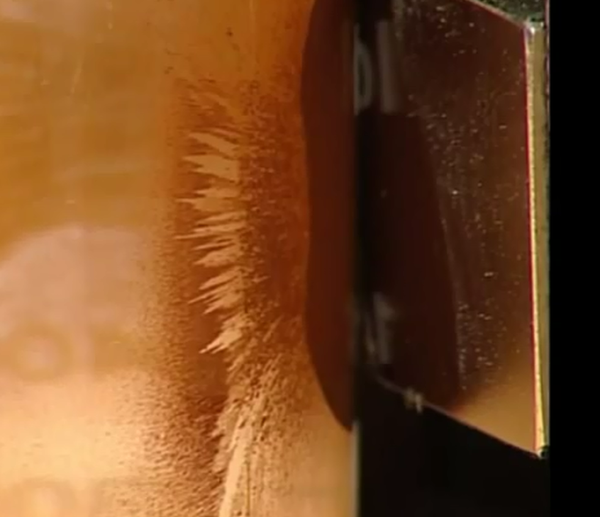 To make the process efficient, the magnetic separation rack must be modified to solve both problems simultaneously. By increasing the force, using, for example larger assemblies of magnet pieces, loss of the farthest beads is reduced but there is far more irreversible bead aggregation near the surface of the magnet. In contrast, reducing the magnetic force in the retention area palliates the irreversible aggregation problem but significantly increases loss of magnetic beads and their attached biomolecules.

To solve both problems simultaneously, more force must be exerted on the farthest beads while reducing the force in the retention area. It is difficult to find a solution with a magnetic force profile that changes with distance, as is the case with classical magnetic separation racks. The ideal solution is to have a magnetic force that does not change with distance. When the force is homogenous (as is the case with Sepmag’s Biomagnetic Separation Systems), it is possible to have a higher magnetic force farther from the retention area and a lower force near the magnet at the same time.

This means that the most distant beads travel faster and the entire magnetic bead separation process is faster without causing additional loss. The beads reach the retention area at a constant pace because all the beads move at the same speed and are subject to a gentle force – just strong enough to retain them when the supernatant is extracted. What's more, no clumps are formed and sonication is avoided, greatly simplifying the scaling up process. 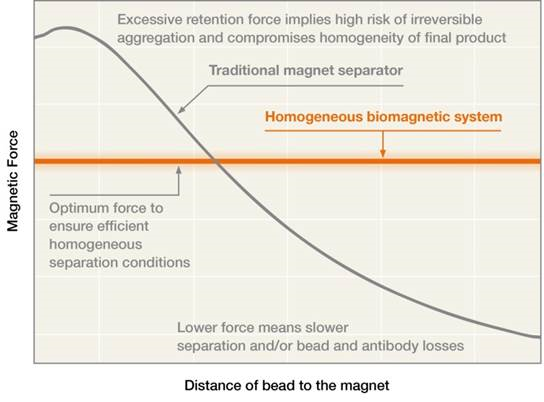 
The exact value of the force depends not only on magnetic gradient but also on the magnetic moment of the beads and buffer viscosity, therefore there is no universal magnetic field gradient value that can be recommended. Fortunately, the companies that develop and manufacture advanced biomagnetic separation systems have amassed a great deal of experience in the field and can help you to determine the final value.

The choice of the right gradient is important because too low a value makes it impossible to separate small beads or beads in high viscosity suspensions (such as, for example, whole blood). In contrast, too high a magnetic field gradient is counterproductive for large beads in water-based suspensions because the resultant magnetic force would be excessive and generate clumps. With most life science processes, there is no one system suitable for all magnetic bead separation processes.

Don't forget to check these posts from our blog in order to get a deeper insight into the scaling-up of biomagnetic separation processes: