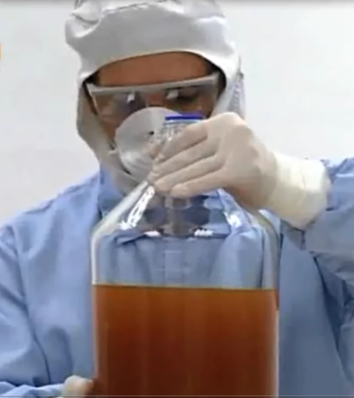 Why is a magnetic separation process so difficult to scale up?

The main issue regarding the scale up of the separation steps in magnetic bead production is the unsuitability of the techniques used for development when these are later performed in an industrial scale. When beads are produced for magnetic separation processes, after they are functionalized, they are processed in order to extract the beads from the supernatant. The methods of choice for processing used to be centrifugation, filtration or tangential filtration. All these methods are slow, unreliable, and costly, involving substantial bead losses, and are the only choices when the beads are not magnetic. However, a magnetic separation process can be performed for magnetic bead separation, allowing for an easier and cleaner extraction.

When a magnetic separation process is the method of choice for separating the beads from the supernatant in IVD kit production processes, scaling up is rarely straightforward. This is due to the conditions for separation, which are often based on empirical evidence and linked to the specific piece of equipment on which they had been optimized during the development stages. Apart from that, the device used in the laboratory for lot production testing and development is usually a simple magnetic separation rack producing non-homogeneous magnetic forces. 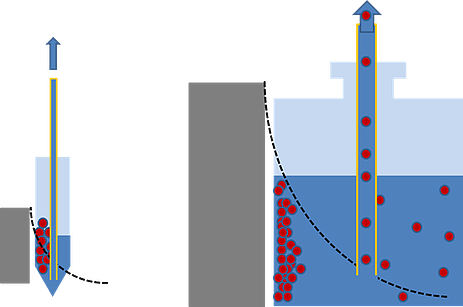 Simplest devices don’t allow to define the magnetic state of the beads precisely enough, hampering the ability to extend the conditions to an increased volume. This often leads to problems with reproducibility and batch consistency. To avoid such issues, the initial parameters can be thoroughly examined, independently of the equipment, and then attempts to recreate the conditions can be made. A simpler and less costly solution is to use a homogeneous system for the magnetic separation process, in which the beads experience a constant and well-defined magnetic force.

An increase in batch volume further increases the distance from the magnet in the most distant beads. The subsequent increase in separation time is disproportionate to the corresponding increase in volume, but necessary to avoid bead losses at unreasonable levels. This exposes the beads closest to the magnets to high magnetic forces for an extended period of time, resulting in bead aggregation that requires additional steps for disaggregation and yields lot-to-lot inconsistencies.

The advantages of homogeneous biomagnetic separation

In contrast to a simple magnetic separation rack, a homogeneous magnetic separation process generates a consistent magnetic force on all beads, irrespective of distance from the magnet. The force over the farthest beads is higher, reducing the separation time and the losses. At the same time, this force can be gentle enough to avoid aggregation while keeping the beads on the vessel walls retained. Both factors (short separation time and gentle retention force) avoid aggregation issues associated with prolonged exposure to high magnetic forces.

Homogeneous separation conditions allow the use of monitoring devices in the process, enabling an early detection of bead aggregation since aggregates will move faster than expected, and solve the safety risks related to simpler devices: This is because homogeneous systems are often closed and have lower-level demagnetization fields, so smaller danger and caution areas are needed.

Altogether with the reduction of safety risks and needed space, the main consequence of this homogeneous magnetic force is an improved consistency between the produced IVD kit lots. As the magnetic separation process is well parameterized in these systems, corrective measures can be applied earlier in the process, saving time, effort and money and contributing towards the overall quality of the product.

Quality Control is one of the key issues at IVD-kits manufacturing. To assure the lot-to-lot consistency is critical to have consistent results when the reagents are used in the analyzers. To decide where to place the quality Control points is one of the more critical decisions, with large repercussion in the kits manufacturing costs. A single control point at the end of the process implies that a ‘no-pass’ result would force the whole batch to discard, wasting all the time and resources invested on it. Having too many QC along the different process steps would greatly increase the costs, as tests usually involve intensive labor and/or expensive analysis techniques.

For CLIA IVD-kits manufacturing (or any products involving magnetic beads), we can take advantage of the biomagnetic separation process itself to check the magnetic beads behavior. As usually there are many separation steps (several washing before and after each conjugation), having them optically monitored provide inexpensive QC points along the whole process. 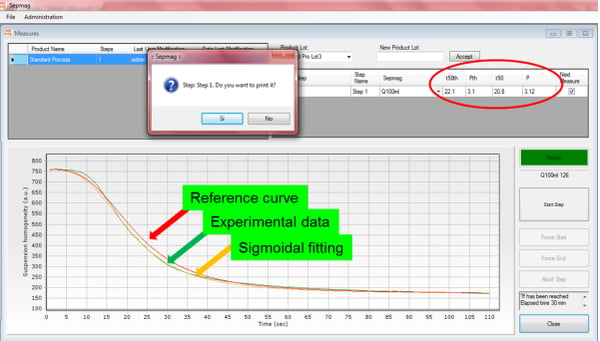 The dynamics of the magnetic beads are very different when the beads are well re-suspended and when clumps are formed. Basically, if you have clumps, the magnetic separation is equivalent to having beads of larger diameter and the process is faster. Unfortunately, the usual SOP (Standard Operation Procedures) only checks visually if the separation is complete at the defined separation time. Even if the clumps accelerate the separation time, it would be impossible to detect by eye-sight at the final specified time, as both suspensions would be crystal clear.

By recording the transmitted light across the vessel, we can monitor the transparency changes during the separation process, showing the described sigmoidal-like behavior. As shown in the figure (real case), using the same suspension in the same SEPMAG® Q1L, the time is reduced by almost a 30% when beads have become aggregated due to a bad storage protocol.

We can take advantage of this behavior to stablish quality control protocols that can indicate re-suspension problems during the biomagnetic separation steps. A reference curve can be generated for each step and the experimental curve obtained during the process. Any significant deviation from it would be an early indicator of quality problem. That may allow stopping the batch and/or take corrective actions before going ahead with the following steps, avoiding the cost and delays to detect the problem and later on the whole manufacturing process. 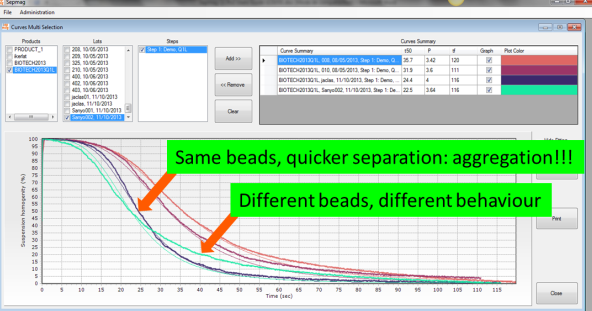 The optical monitoring of the biomagnetic separation process gives us much more information than just the separation time. Besides giving us a methodology to objectively determine this parameter –i.e., not dependent on subjective eye-sight-, the measured curve would be an early alert for many quality control problems. Its shape would change not only as a result of the clumps formation, but also viscosity or concentration, or if the magnetic beads have different diameter or content of magnetic content.

When the entire process is monitored rather than separation time alone, Quality Problems can be identified more quickly. Deviations from the reference curves may reveal numerous production problems (aggregation, incorrect bead characteristics and incorrect concentration) that can be detected during the Biomagnetic Separation step. This meanscorrective actions can be taken sooner, thus reducing costs.

In future documents we will discuss with more detail how different production problems affect the optical curve, so that the reader can have a basic guide to detect the rooth cause of the non-conformity of the batch.