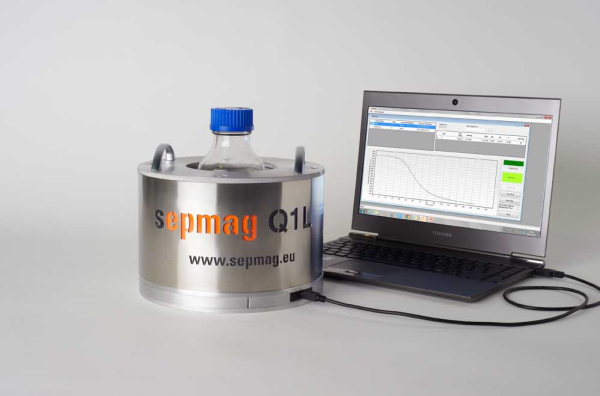 The traditional way to check whether a biomagnetic separation process is complete is by sight. The technician/researcher looks at the suspension: at the beginning of the process, the suspension is homogenous and opaque, but when the separation process is complete, the magnetic beads are left on the walls of the vessel and the supernatant is transparent. When the suspension is ‘transparent’, the technician stops the process by extracting the supernatant, leaving the magnetic beads in the bottle.

After repeating the same process several times, a separation time can be defined and used as a benchmark. With this traditional method, however, the only quality control record is the OK/no OK signed by the person handling the vessel with no supporting data. Because of this, in case of a quality issue with the product, this cannot be detected until a later stage, and there are no records to show whether the problem occurred before, during or after the biomagnetic separation.

In contrast, by continuously monitoring the opacity of the suspension while inside a Homogenous Biomagnetic system, technicians have a record of its evolution during the process. Changes in opacity inside a Sepmag® biomagnetic separator should be the same if the suspension is the same. Changes to the properties of the magnetic beads (diameter, magnetic charge), concentration and/or viscosity of the buffer lead to different opacity behavior, so any deviations from the expected pattern serve as an early warning system.

The process is documented with printed reports for every stage. The acceptance parameter can be defined objectively, without subjective operator judgement. Moreover, the accumulated experimental data allows teams (technicians, researchers and managers) to audit, analyze, revise and improve the magnetic separation process steps of their manufacturing processes. 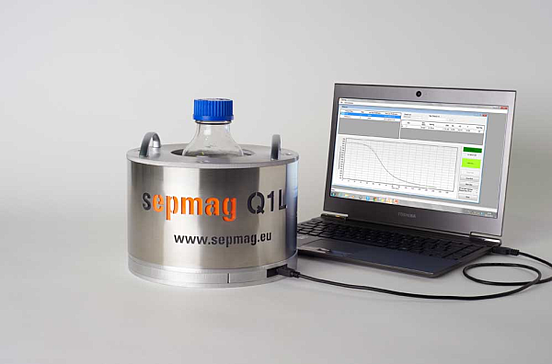 To address this problem, Sepmag® QCRv2 has been developed to give technicians, researchers and managers a way of obtaining an objective measurement of the Biomagnetic Separation process. The goal is to replace the traditional determination of the separation time by eye estimation with a measurement of the opacity of the suspension throughout the entire process.

Sepmag® QCRv2 is composed of a cold lighting assembly of LEDs and an optical sensor. Both subsystems are controlled by an electronic card connected to a PC running Windows through a USB port. The software identifies the specific Sepmag® unit, records the data captured, generates printer-friendly reports, saves the historical data on a database and helps to manage the steps in the biomagnetic separation process.

What does the Sepmag® QCRv2 measure?

Fig. 1: Opacity of a typical magnetic bead suspension. Before separation it is dark and homogenous. When separation is complete, the beads are on the wall and the suspension becomes transparent.

How does Sepmag® QCRv2 characterize the biomagnetic separation process?

The typical Biomagnetic Separation curve has a sigmoidal shape. As discussed in several technical documents, both the slope (defined by the dimensionless exponent ‘p’) and the separation time (t50, expressed in seconds) depend on the buffer viscosity, the properties of the magnetic beads and also the concentration. The biomagnetic separation conditions are homogenous and well known for each Sepmag® and both parameters can be used to define and validate each separation process. 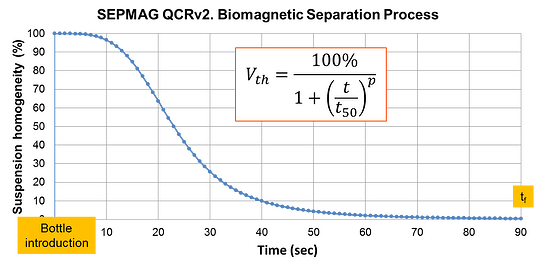 What happens while the bottle is in the Sepmag®?

This means that users do not need to worry about defining the length of the process in advance, allowing longer measurements when necessary.

The system then records three processes that typically occur while the bottle is inside the Sepmag® system:

After refilling, the bottle is extracted and the Sepmag® QCRv2 stops taking measurements.

This means that the software generates a historical database of the values of these two parameters, t50h and pth for each step. These two values can be used as reference to compare against future step measurements.

The software manages historical data to automatically generate reference curves for each step of a product process. Only users with administrator privileges may exclude curves from the statistics, or ‘freeze’ the standard when enough data has been captured.

During measurement, once t50th is reached, the software shows a predictive curve using the reference values (t50th, pth). At the end of the measurement, it compares the experimental data with the ‘standard’ curve. 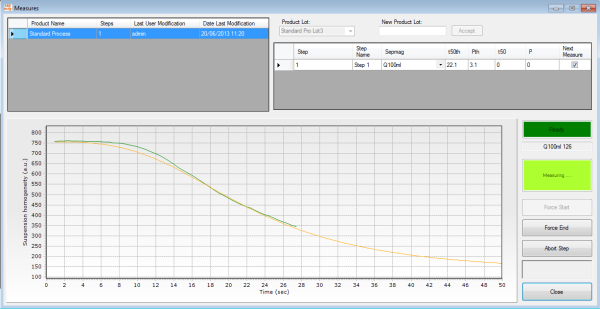 Sepmag® QCRv2 is an electronic quality control recording system used to monitor biomagnetic separation processes, which allows batch-tracing and early detection of potential quality issues. This feature can be integrated in the Sepmag® Q and Sepmag® A systems or provided as an external unit.

In close cooperation of our IVD-production customers, we have developed a tool not only for measuring, but also for managing the results, thus helping users to validate their batches.

Sepmag® QCRv2 has new features for defining multiple step product processes. Each step is characterized and compared with standard separation curves. We hope these improvements and built-in reports will be helpful and that they will simplify the validation and quality control of your biomagnetic separation process.