The validation of each single production batch is a mandatory requirement at IVD-kits manufacturing. The lot-to-lot consistency is critical to assure consistent results when the reagents are used in the analyzers.

Since many steps are involved in the production process, the placement of Quality Control points is one of the more critical decisions, with large repercussion in the kits manufacturing costs. A single control point at the end of the process may seem cheap, but it implies that a ‘no-pass’ result would force the whole batch to discard, wasting all the time and resources invested on it. The other solution, having many QC along the different process steps would greatly increase the costs, as tests usually involve intensive labor and/or expensive analysis techniques. The key to have an efficient and cost effective QC protocol would be having the right number of test points, and whatever possible, use existing techniques not requiring intensive use of manpower.

For CLIA IVD-kits manufacturing (or any products involving magnetic beads), we can take advantage of the biomagnetic separation process itself to check the magnetic beads behavior. As usually there are many separation steps (several washing before and after each conjugation), having them monitored provide inexpensive QC points along the whole process.

To do it, however, we should update the way that Biomagnetic separation steps are usually validated. In many cases, these processes are validated solely by separation time. The technician checks by eye-sight the transparency of the suspension after the defined separation times, and if he/she found it OK, signs the form. No information about how the process has run is recorded. This single end-of time point control limits the possibility of audits if problems are detected in later steps.

To address this issue, Advanced Biomagnetic Separation systems have recently incorporated monitoring systems to record the suspension transparency changes. By recording the transmitted light across the vessel, we can monitor the transparency changes during the whole separation process. The resultant curves give a quantitative value of the transparency at the end of the process, and also show how it changes since the vessel is introduced in the magnetic separation rack. Properly recorded, these graphs would allow comparing the successive batches, and generating references curves. 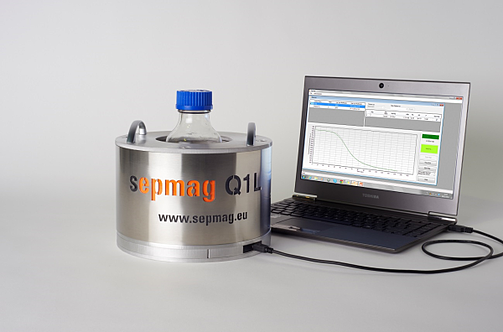 Having the Biomagnetic Separation System equipped with optical monitoring, implies having an additional QC point for each single washing step, without the need of external equipment or additional labor costs. Any change of the properties of the magnetic beads (diameter, magnetic charge), the buffer (viscosity, ionicity, beads concentration) would affect the separation behavior. Any deviation from the expected curve can be used as an alarm. It would allow stopping the batch before incurring in additional costs and/or make the corrective actions when possible.