The two essential methods of magnetic cell-sorting are High Gradient Magnetic Separation (HGMS) and Low Gradient Magnetic Separation (LGMS). The selected method of separation naturally impacts separation workflow, purpose, devices employed, and process results. The size of the particles used during separation will be a relevant factor informing the methodology. Large beads (>00 nm) mutually interact, thereby accelerating the separation process. As such, they can be effectively separated with moderate gradients. In contrast, smaller beads (<100 nm) must be separated individually. They require higher gradients for separation, with gradient-levels increasing as bead size decreases.

High gradient magnetic separation has become a favored technique of biomedical cell separation. The magnetic force generated during a HGMS process must be high enough to overcome drag and other forces produced by the flow of the sample. The high gradient necessary to overcome these forces can only be achieved in small-gap systems. Thus, the process requires specialized, low-volume columns. The column is packed with stainless steel beads or wool, which are magnetized when a magnetic field is applied. When a sample containing magnetically labeled particles is pumped through the column, the particles are retained by the induced magnetism of the matrix. The particles themselves are superparamagnetic. Upon removal of the magnetic field, the magnetic moment of the particles becomes zero and they can be collected by elution.

HGMS is most frequently used for small volume processes such as cancer research, immunology, neuroscience, and stem cell research. One of the classical uses of HGMS is an antibody-binding method that utilizes cell-surface antigens as properties for separation. Iron oxide particles labeled with antibody are selectively conjugated to cells with the corresponding antigen. Unlabeled cells within the sample are eluted following placement in a magnetic field. 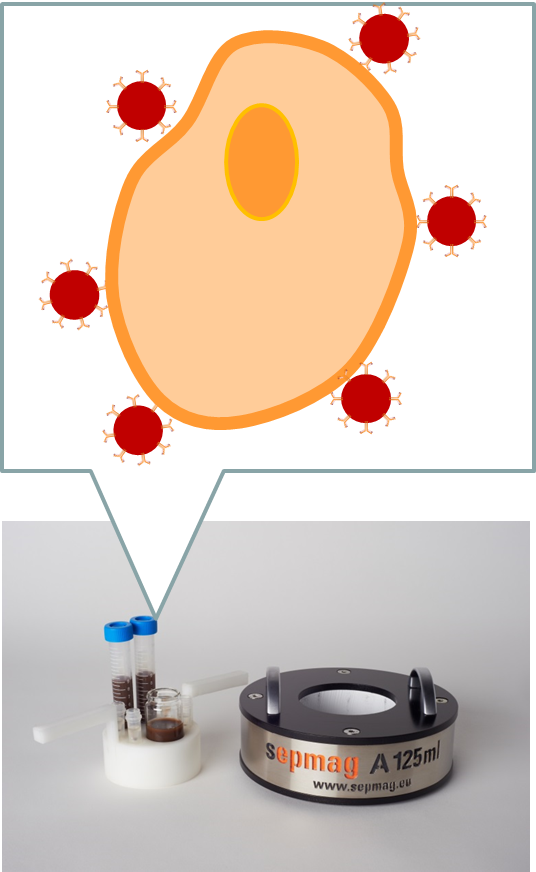 Selection can either be positive or negative. With positive selection, the supernatant is discarded, while the targeted particles are retained. In this case, labeled cells, those under investigation, remain in the magnetic field until they are detached from it. This is the source of separation. Cells coated with magnetic beads will experience a magnetic force and will travel in the direction of the magnetic field gradient. In negative selection, the opposite is true. The washed ('cleaned') supernatant contains the desired particles, those targeted by the process. The beads/particles captured by the magnetic field are those removed from process consideration.

This article explains different methods used for cell sorting. If you are interested in knowing more about this process, download our free basic guide to magnetic bead cell sorting:

The outcome of a HGMS process is affected by a number of variables, including the size, shape, and distribution of the magnetic particles utilized. Typically, HGMS designs will be customized for the purposes of each separation protocol. Careful development and execution of unique parameters particular to each separation condition is essential, and will play a role in the ultimate efficiency and integrity of the process.

Unlike HGMS, low gradient magnetic separation does not require specialized, pre-packed columns. LGMS makes use of specific magnetic field patterns that allow the process to be carried out in containers ranging from microtubes for smaller-scale laboratory volumes, to bottles or other containers for larger-scale processes. The magnetic gradient is generated by Permanent Magnet arrays that ensure stable and reproducible conditions.

Magnetic separators for LGMS biotechnology applications employ batched-mode and relatively low field gradients to separate magnetic beads from liquid suspension. Since such opposing forces as sedimentation can retard separation, LGMS requires magnetic force over the beads to be sufficiently large to compel them to move more quickly than the sedimentation or other retarding effects. Beads with enough magnetic moment will experience a dipolar interaction between them, which will accelerate the separation. As such, LGMS relies on a larger critical size of microbeads to capture and retain cells for sorting and separation.

Where conventional inhomogenous LGMS processes generate significant force in the retention area, resulting in possible cell membrane stress and lysis, homogenous force systems avoid this problem. Because the magnetic force is constant, all beads experience it equally, traveling at a uniform speed to the retention zone.

Contemporary LGMS systems also avoid complexity issues affecting process scalability because their magnetic force is homogenous and therefore well defined. Thus, scaling up of separation processes is typically far less complicated than inhomogenous force systems. Unlike conventional flow cytometry methods, the selection of specialized cell populations can be scaled up as needed. The well defined conditions are easy to reproduce at the different volumes required at the various levels of process implementation.

There are a number of factors that can affect a separation process, and variables such as particle magnetic content and size are critical considerations to take into account before settling on a particular platform. Ultimately, however, the choice of methodology will be dictated by the process goals, and subsequent protocol design will be aimed at maximizing both yield and efficiency.