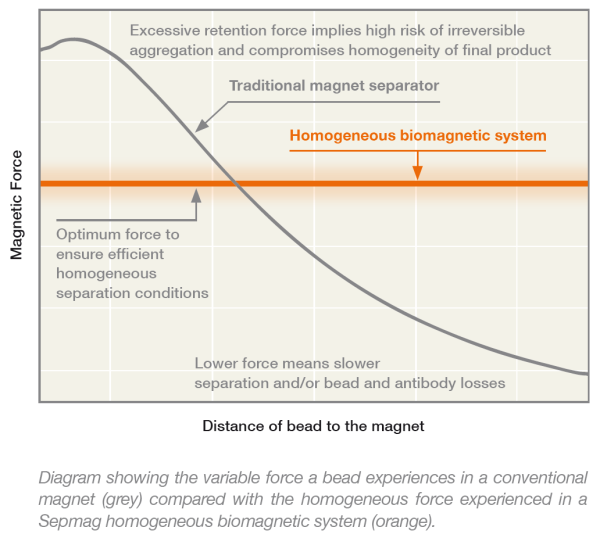 Coating your magnetic beads with biomarkers is the most critical step during the development and production of Chemiluminescence Immunoassays (CLIA). Attaching the antibody (or any other protein) to the bead’s surface requires incubating both materials together, using the right buffer and temperature, gently mix and homogenize the suspension. Once the process is completed, it is necessary to separate the solid phase (the magnetic beads with the attached biomolecule) from the rest of the suspension and, once washed, re-suspend the reagent in a new buffer for avoid biomarker reaction and beads aggregation.

Depending on the selected surface chemistry the coating process may require several conjugation steps. In a typical process, the washing process would need to be repeated a few times to ensure that there are no unbounded biomarker molecules in the final suspension. One option would be using non-magnetic techniques to separate the beads from the suspension, centrifugation, or filtration; but the most popular approach would be to use magnetic separation. This process is faster, cleaner and cheaper. It takes advantage of the superparamagnetic properties of the beads (i.e. when the magnetic field is removed, the beads loss ALL their magnetic moment). Only when beads are ferromagnetic (i.e, remain magnetized after removing the field) is the use of non-magnetic separation techniques plausible.

When problems are detected at small scale –R&D team works usually with volumes of few ml-, they are usually attributed to quality problems of the magnetic beads or to bad coating protocols. But, in most cases, the problems are not so evident at small volumes for the early validations are passed. When the protocols are scaled up the losses increases and become evident. The problems generated by the in-lot inconsistencies also increase in number. Again, the first reaction is to blame the magnetic beads or the coating protocols. The time and resources invested trying to fix the wrong cause can be painful expensive and useless.

What is the real problem? To understand the problem we should realize that most of the magnetic separation racks generate a magnetic force strongly dependent on the distance. Then the farthest beads experience a very weak force. The solution at small scale is to increase the separation time, since passing from few seconds to a couple of minutes is not a big problem. However, when the suspension volume increases, so the distance of the farthest beads to the retention area, the separation time increases exponentially. In realistic separation times (up to about one hour), losses are appreciable, and then repeated washes can reduce the throughput and efficiency. Even small losses of the magnetic beads in a single separation step, would generate a significant reduction after the repeated process. A loss of 5% of the beads by per step will become a cumulative loss of the 23% just during 5 separation steps. If the losses are not constant, there would be other factors contributing to compromise the lot consistency.

The first solution seems to be increasing the magnetic force over the farthest beads. However, this would imply the increase of the force at the retention area several times. This even more excessive force would crush the beads generating irreversible aggregates (‘clumps’) that would reduce the exposed surface to the analyte or to the next step of the coating protocol. Since the whole processed volume should be divided into small single-doses (typically few microliters), the clumps imply a large variability in the IVD-kit response, even in the same single lot. Re-suspending the magnetic beads would be complicated (sometimes even impossible), and the use of sonication would become increasingly complex and expensive when the volume scales reaches fraction of liter.

Using magnetic separation rack with an inhomogeneous magnetic force profile makes it impossible to deal with both problems at the same time. If you try to reduce losses, you will generate more clumps. If you try to be gentler in the retention area to avoid clumps, then the losses and/or the separation time will increases exponentially. 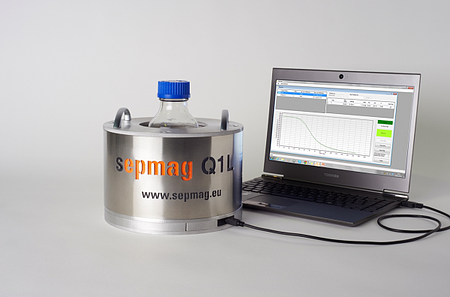 How can the problem be solved without coming back to the painful centrifugation or filtration techniques? Just by avoiding root cause, which is using a biomagnetic separation system that generates a magnetic force constant with the distance to the wall. If the force is homogenous in all the working volume, you can reduce the retention force and, at the same time, have a stronger force over the farthest magnetic beads. As the beads placed far away from the retention experience the same force nearest, all the beads move at the same speed. The separation time will be much shorter (and proportional to the distance the beads travel), reducing both the losses and the separation time. These two facts, and the gentler retention, which also rewards with no clump formation, allow increasing the number of steps of the washing and coating protocols.

The use of homogenous separation conditions means having a well defined single magnetic force value in all the working volume. It allows selecting the right value for retaining the magnetic beads: just strongly enough to don’t be aspired when the supernatant is extracted. No applying an additional and excessive force at the retention area, means being gentler than any classical magnetic separation rack. At the same time, even for the gentler retention, the force at large distance –exactly the same value as in the retention area- would be much higher than an in the inhomogeneous magnetic force devices. The exact value of the force would be defined by the magnetic field profile and the magnetic moment of the beads, and the speed would also depend on the suspensions viscosity and bead diameter. For different combinations of magnetic beads and buffer, the magnetic field profiles of the separation system should be different (as is the case of the SEPMAG® LAB, A and Q series).

Using the same force value, changing scale would simply need to extend the separation time proportionally to ration between the vessel diameters. By reducing the retention force and the time the beads remains in the retention area, we reduce the risk of irreversible aggregation. As consequence, the coating protocols developed at small volumes can easily be scaled up. The well established conditions (value of the magnetic force, homogenous in all the working volume) ensure the washing steps can be reproduced regardless the volume without clumps formation or losses increase. As the separation speed is constant, the separation time would need to be increased just proportionally to the vessel diameter.

The use of the right homogenous magnetic force would simultaneously eliminate losses, avoid the limitation on the number of steps for your coating protocol and improve the in-lot consistency -avoiding irreversible aggregation and simplifying the resuspension-.

Having all the magnetic beads surface exposed to linking the biomarkers and keeping the same amount of magnetic beads during all the steps are basic requirements to compare the performance between different coating protocols. By being assured that your biomagnetic separation steps (washings) do not loose beads nor form clumps, you will be able to focus on optimizing your coating procedures