Chemiluminescence begins when two chemicals interact and electrons jump to a higher energy level (also called electron orbital or shell). This is only an intermediate state, called a “high-energy intermediate.” When the electrons relax back down to a lower energy state, energy is released in the form of photons (as electromagnetic radiation), or light! It is important to remember that chemiluminescence is the result of a chemical reaction, and is not the same as fluorescence. The crucial difference is that chemiluminescent reactions do not need an input of excitation light of any kind for you to see the output from the reaction. The general chemical formula of chemiluminescent reactions is A + B→ C* + D → C + light + D. Where C* is the high energy intermediate.

Probably one of the most well-known chemiluminescence examples is firefly lucerin.  Luciferin is a general term for a small molecule that emits light in a reaction with an enzyme. In fireflies, the reaction of luciferin with ATP (adenosine triphosphate) in the presence of the enzyme luciferase produces their light. This reaction is also categorized as bioluminescence.  The chemiluminescence reaction is used in research and clinical laboratories as well.  The light emitted from the reaction is useful as a detection method for the presence of molecules or binding events in assays such as an elisa (enzyme-linked immunosorbent assay). For this assay there are secondary molecules that come pre-bound to HRP (horseradish peroxidase) which reacts with a molecule called luminol to produce light. Enzyme protectors such as phenols, napthols, aromatic amines, or benzothiazoles are added to the reaction to preserve the enzyme and enhance the light output over several minutes. For this reason these molecules are called “enhancers”.

Another chemiluminescence example is that of luminol with hydrogen peroxide. This reaction is catalyzed by the iron located in hemoglobin. It is used at crime scenes to illuminate blood. Luminol can also react with nitric oxide in air to produce an excited aminophthalate anion intermediate that relaxes to produce water, molecular nitrogen, and light. This reaction is used to detect nitric oxide levels in air to determine pollution levels.

Another chemiluminescence example is the reaction of a peroxyoxalate such as bis(2,4,6-trichlorophenyl)oxlate TCPO and hydrogen peroxide to produce a high-energy intermediate 1,2-dioxetanedione. A fluorophore such as 9,10-diphenylanthracene present in the solution will be excited by transfer of the excited electron from the intermediate molecule and will emit light. Two commonly used enzymes for chemiluminescence reactions are alkaline phosphatase (AP) and horseradish peroxidase (HRP). These enzymes catalyze oxidation of substrates in the presence of hydrogen peroxide oxidizing agent. Whether the reaction produces a simple color change or light is entirely dependent on the choice of substrate.

Another fun example of chemiluminescence can be observed in glow sticks. When the stick is cracked it allows the reaction of the substrate cyalume plus a dye with hydrogen peroxide to proceed to produce an excited dye that emits light. The reaction has a limited lifetime, and the glow stick will eventually lose its luminescence, but it lasts longer than most chemiluminescence reactions. The dye releases light energy at a slower rate than most high-energy intermediates. This idea can be transferred to the laboratory to extend the lifetime of chemiluminescent reactions and to increase the time available for imaging. 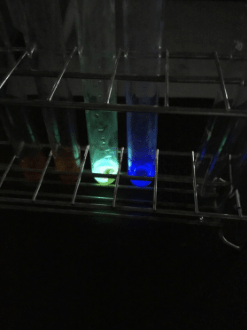 In a chemiluminescent magnetic immunoassay (CLIA) antibodies are labeled with a chemiluminescent substrate. The corresponding antigen is bound to paramagnetic beads. During an incubation period, the labeled antibodies bind to the antigens on the magnetic beads. Then, the conjugated beads are isolated from solution by magnetic separation. After isolation the reaction solution is added. This reaction solution contains the other substrate and an appropriate enzyme to produce a chemiluminescent reaction. Light is produced only if the labeled antibodies matched the antigens on the bead surface. The use of magnetic beads  concentrates the beads in a narrow area, which enhances the ability to detect the light emitted by the reaction. Then new biomagnetic separation systems, using constant magnetic force devices and monitoring the separation speed of the beads, are useful tools to keep track of the efficiency of the process while developing the reagents and buffers. 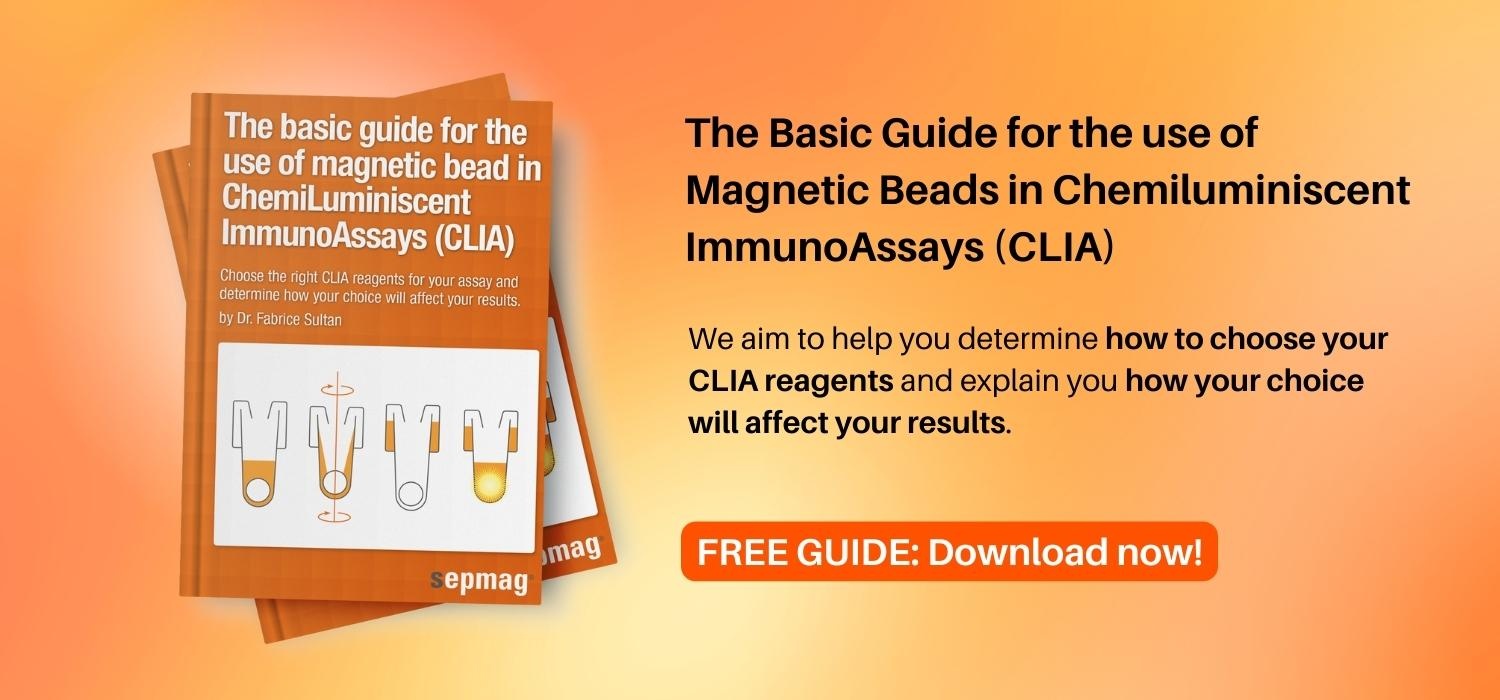