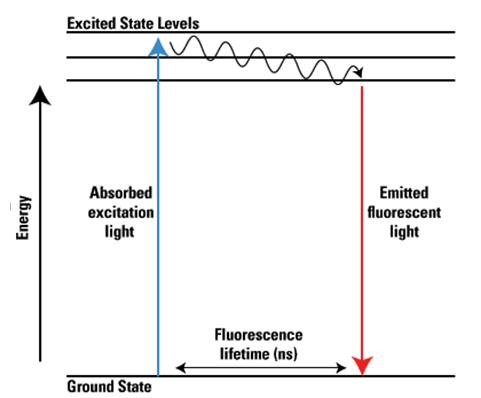 The first step toward making a fluorescent molecule emit light is to excite an electron into a higher energy level by exposing the molecule to light of an appropriate wavelength. This is called the excitation spectrum. Different fluorescent probes are excited by different wavelengths of visible light. For example, the valence electrons in AlexaFluor 594 are kicked up to a higher energy state by the input of photons of 590nm light, while Alexa Fluor 488 is excited by 496nm light.

The electrons are not stable in this higher energy state and will relax back down to a lower energy state. This relaxation is quantized, meaning that it is like steps on a ladder. The electrons of a particular probe will always fall back to the same rung ofthe ladder, and will always release that excess energy as photons of a certain color. If excited with a proper wavelength, Alexa Fluor 594 will always emit red light with a wavelength of 617nm, and Alexa Fluor 488 will always emit green light with a wavelength of 519nm. This light can be qualitatively measured by eye, and can be quantitatively measured by fluorescence spectrometry. 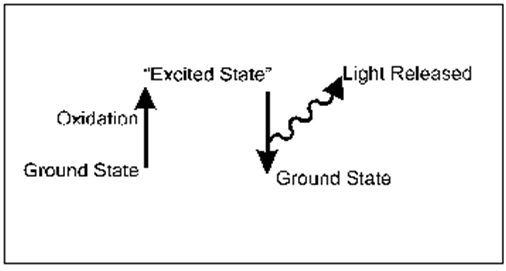 Sometimes these intermediate species release only a modest amount of light. There are enzymes such as horse radish peroxidase (HRP) and alkaline phosphatase (AP) that are used to amplify the light in the presence of appropriate substrates. This is called enhanced chemiluminescence. Photomultiplier tubes can also be used to detect a weak chemiluminescent signals.

An example of a Chemiluminescent reaction

Luminol + hydrogen peroxide produces oxidized luminol in a high energy state, which releases light as it relaxes to a more stable energy state. The amount of light released can be increased up to 1000 fold with the addition of HRP and a substrate such as lodophenol, which produces a high energy phenolate radical intermediate.

Instruments for Chemiluminescence and fluorescence

In order to gain information from a chemiluminescent or fluorescent reaction, one must have a proper method of detection. Fluorescence is more complicated because unlike chemiluminescence it requires an external excitation source. Fluorescence instruments are called fluorometers or fluorescence spectrophotometers. These instruments will start with a light source, such as a xenon arc lamp, which goes through a filter to select for the correct excitation wavelength for your sample. Light emitted from your sample will then go through another filter for a specific wavelength for your emission and finally a detector. Fluorescence detection is done at an angle to avoid capturing the excitation light. In fluorescence the emitted light will go in all directions and you can capture it at an angle while excitation light can be detected by another detector. The change is described by “stokes shift” and visualized as peaks in fluorometer devices.

Chemiluminescence instrumentation is more simple and designed to measure light output. The device has a place for your sample, which can move into a reaction chamber where chemiluminescence will occur, and a detector. The detector used is photodiodes or photomultiplier tubes, which sense light and set off a chain of reactions which transduce light into quantifiable signals.