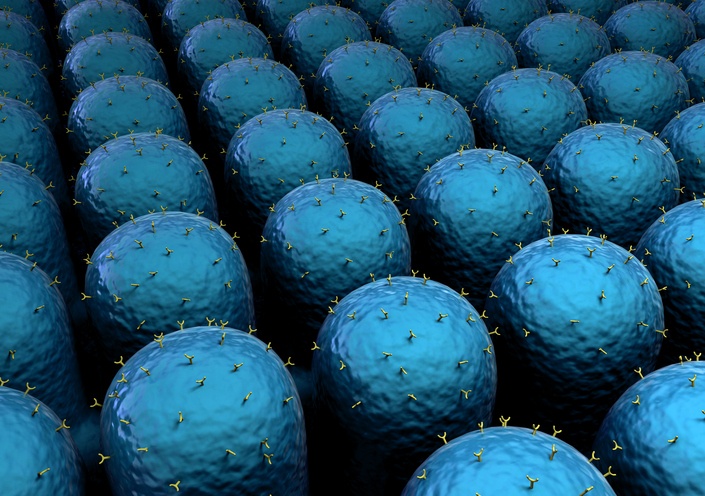 From the clinical laboratory ELISA to the home pregnancy test, the conjugated antibody is integral to the function of many diagnostic assays. We know about the specificity of antigen-antibody interactions and their role in mounting the innate immune response to a pathogen. This antigen recognition specificity has been utilized by clever scientists and engineers to create biosensors capable of detecting the presence of antigens in biological samples. Biosensors come in many shapes and sizes, and have varying levels of complexity, but one fundamental concept is the need to covalently attach antibodies to a substrate.

Antibodies are proteins that are approximately 150 kDa in size. An IgG antibody is made of two heavy chains and two light chains, each of which is a polypeptide consisting of a precise arrangement of amino acids. Each amino acid has a primary amine N-terminus, a carboxyl C-terminus, and a side chain. These side chains can carry a positive or negative charge, no charge, or even have hydrophobic properties. Each polypeptide folds into a tertiary structure with hydrophilic and hydrophobic pockets and these heavy and light chains  join together via disulfide bonds to form the final Y-shape of the IgG antibody. These antibodies are often referred to as glyoproteins because some of the amino acid residues are conserved by sugar molecules. All of these structural components of the IgG can be used for antibody conjugation chemistry. Some of the most useful targets are the primary amines of lysine side chains, the disulfide bridge, cysteine thiols, carboxyl side chains, hydroxyl side chains, and glycoprotein sugars.

The NHS (N-hydroxysuccinimide) ester reacts with a primary amine to form an amide bond while the NHS acts as a strong leaving group. What remains is a strong covalent attachment of the desired molecule. NHS ester chemistry is commonly used to attach biotin tags to antibodies. These biotinylated antibodies can then be conjugated to anything with an avidin molecule. This avidin-biotin affinity is one of the strongest and most specific biological interactions known. As such it is a very useful tool for antibody conjugation. Bifunctional NHS-esters are available for the conjugation of two molecules containing primary amines. This can be useful, but there is a chance of unwanted aggregation.

Carboxylic acids are another good target for protein conjugation. The COOH can be linked to a primary amine directly by adding EDC (1-Ethyl-3-(3-dimethylaminopropyl)carbodiimide. A primary amine reactive EDC intermediate is formed, which leads to the formation of a stable amide bond. The EDC intermediate is unstable, so another variation of this reaction involves the addition of NHS ester or sulfo-NHS ester to convert the COOH to an NHS ester. The NHS ester must be used rapidly because it is hydrolyzed by water.

Malemide reacts with sulfhydryl groups to form thioether bonds. Thiols are not as numerous as primary amines in IgG antibodies, so this method may be less likely to interfere with the antigen binding site. It also targets the disulfide linkage between the polypeptide chains comprising the antibody. This makes it a bit easier to predict the orientation of antibody conjugation.

This rather harsh method of antibody conjuation involves the oxidation of sugar groups on the glycoprotein antibody. The sugar groups are oxidized to aldehydes via the addition of sodium periodate. Once the aldehydes are formed they can react with primary amines to form imines. These imine bonds are reversible, so they must be reduced with sodium cyanoborohydride to make them stable. The chemicals used in this method must be handled properly and used in a chemical hood. They can also be harsh on the antibodies and can cause loss of antigen recognition. However, it can still be useful in certain applications.

The path toward understanding immunodiagnostics and biosensors is clear once an understanding of protein conjugation chemistry is obtained. These strategies are used over and over again in the development of new technology. Antibodies can be conjugated to any surface that is properly functionalized; this allows for the use of new materials in creative ways.