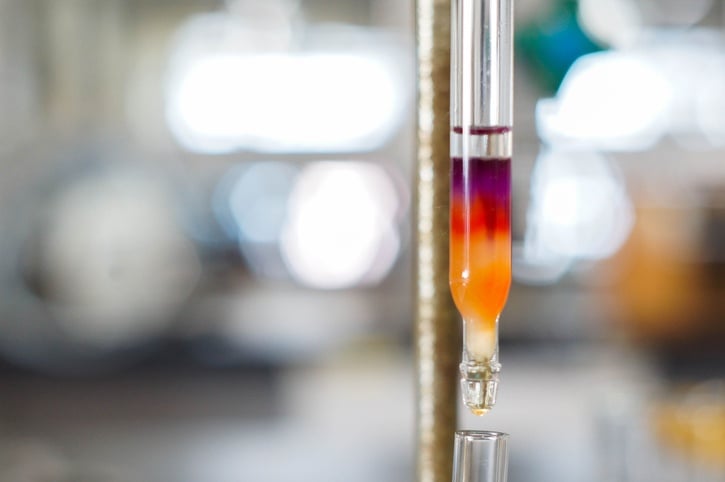 Immunoaffinity chromatography is a method for separating target antibodies or antigens from a heterogenous solution. It is column-based, which means that the solution is flowed through a column and eluted at the other end. The column is pre-functionalized with the capture antibody or antigen. The target protein is adsorbed onto the resin-bound capture protein and is retained in the column while the remaining solution is eluted. The fraction containing the target protein is later eluted and purified.

Antibodies are 150 kDa proteins produced by immune cells (B cells) to recognize antigens and potentially launch an immune response against a pathogen. They are Y-shaped with a lower portion called the Fc region and the upper arms are called the Fab region. The Fab region is what recognizes a specific region called an “epitope” on antigens. There are several types of antibodies, IgG being the most commonly found. The others are called IgM, IgE, and IgA, and IgD. Immunoaffinity chromatography can be done using polyclonal or monoclonal antibodies. Monoclonal antibodies are made from one type of B cell, and all recognize the same epitope. Polyclonal antibodies can recognize multiple epitopes on an antigen.

Antibodies and antigens are often thought of as lock and key protein pairs. Antibodies are naturally produced by the immune system in order to identify foreign pathogens and label them for attack and destruction. Antigens are protein markers unique to each invading pathogen. Many proteins can be thought of as antigens when they are identified and bound to an antibody through non-covalent interactions. They don’t have to be foreign pathogens to be called antigens. This lock and key affinity is useful to biomedical engineering, biotechnology, and medicine. Immunoaffinity chromatography is one example of their usefulness for target enrichment.

Traditional imunoaffinity chromatography columns are made of agarose, cellulose, or other similar proprietary materials. Immunoaffinity protocols utilize materials that form gels or matrices to hold antibodies in a column. Polymers like polyacrylamide and polymethacrylate have also been used. These materials are relatively inexpensive, but can only be used in low pressure chromatography. If the mobile phase needs to be under higher pressure, such as in high performance liquid chromatography (HPLC), then these column materials are unsuitable. For high performance immunoaffinity chromatography, the columns have been made of silica, azalactone beads, and more sophisticated polymer support systems.

The capture antibodies are typically attached to the chromatography column via covalent bonds. The most important considerations in this process are the orientation of the antibody and the attachment points. It would be inefficient to attach antibodies to the column at the Fab antigen-binding sites. These sites need to remain unbound, unobstructed, and free for antigen binding. A few common methods for chemical conjugation of antibodies to solid supports are discussed below.

Both an application and an elution buffer are needed for the immunoaffinity chromatography process. The application buffer is the buffer in which antibodies optimally bind their target. Antibodies are known to have a range of binding affinity. High affinity antibodies bind in the 10-12 range while weaker interactions are around 10-6. Generally, antibodies bind their target in the neutral pH range, ~pH 7.0. Elution is more tricky because a buffer must be optimized that can make the antibody-antigen bond weaker so antibodies elute from the column, but keep the column ready for potential regeneration, especially when scaling up production. Changing pH or using chaptrope agents are popular methods for eluting. As with most column elutions, the added changes to solution can be done gradually to slowly optimize elution.