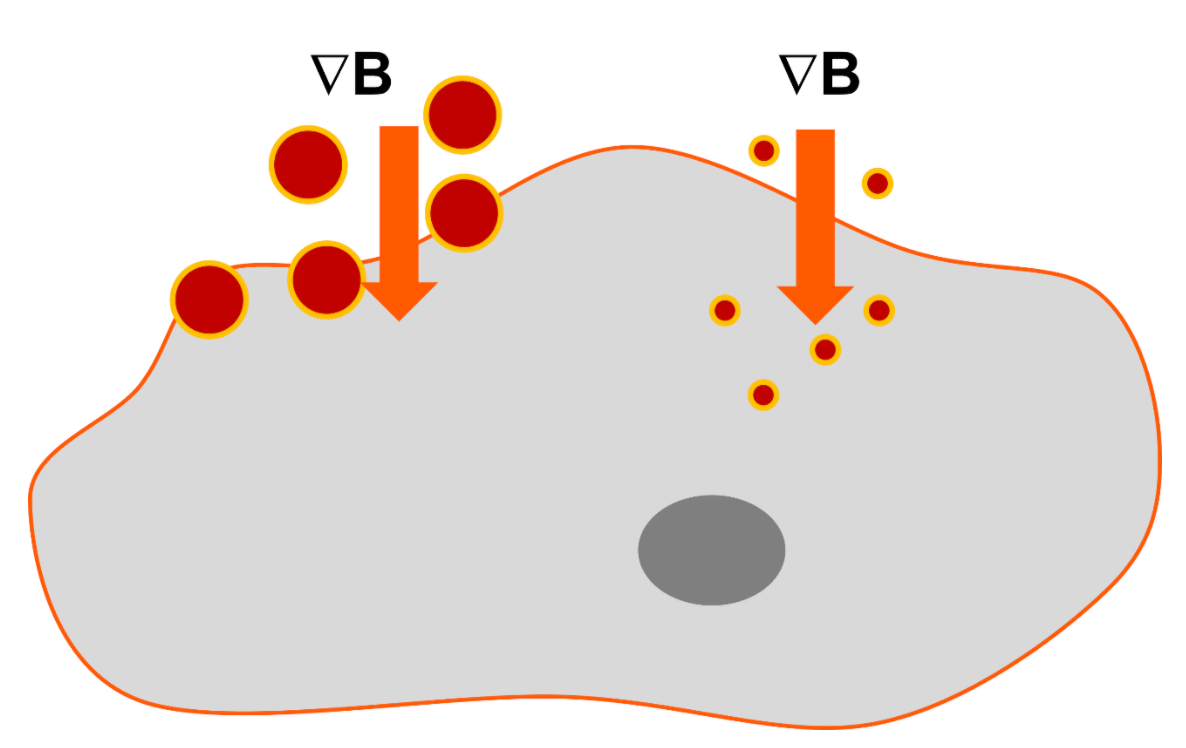 The capability of 1 μm and 2.8 μm magnetic particles to intracellularly deliver cargo proteins

In a recently published paper, researchers of the CIBER-BBN and the University Autonoma de Barcelona demonstrated that magnetic microparticles of 1 and 2.8 μm of diameter, in combination with an appropriate magnetic force, could greatly decrease the time needed to interact with and enter target cells, a clear advantage over other types of drug delivery systems.

The two main bottlenecks for the use of micro and nanoparticles in drug delivery are the administration pathway (i.e., how to reach the target cell) and how to achieve efficient cellular uptake of the drug-material conjugates. Magnetic particles easily overcome the first problem as they can be targeted to specific locations through the application of a magnetic field gradient. However, a successful drug delivery system also needs to overcome the second bottleneck. As proteins are generally unable to cross the membrane barrier of eukaryotic cells, the interaction of the drug carrier (nano- and microparticles) with cell membranes is a key factor to consider. Two main steps of this interaction between vehicle and membrane are the adhesion of the particles to the membranes and their subsequent engulfment by these membranes. The small magnetic nanoparticles (<100 nm) used as drug carriers, penetrate with high efficacy, but they end on the endosomal route. By contrast, the larger particles remain membrane-linked. This specific localization is especially appealing to greatly simplify the delivery of hormones, growth factors, antagonists, and other cell signaling effectors,

This scientific publication demonstrates the capability of large (1 and 2.8 µm of diameter) magnetic particles to intracellularly deliver cargo proteins, driven by a magnetic field gradient, opening the way to use the proposed drug delivery system for the design and engineering of novel particulate vehicles for therapeutic, diagnostic, and theranostic applications. The authors have also proved that such large magnetic particles used as internalizing drug carriers are fully biocompatible. In this sense, they showed that the engulfment of such large magnetic particles, driven by the magnetic field gradient, does not result in any loss of cell viability or morphological aberrations of the target cells.

The materials and method section describes that part of the process was done “with a precision magnetophoresis system from Sepmag Systems (STEPMAG 125).” (The current equivalent model is the SEPMAG® A200ml).