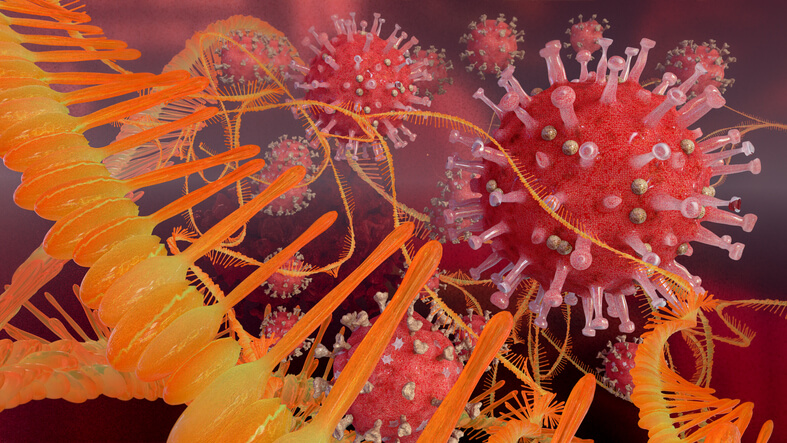 The letters “mRNA” are heard everywhere lately. The mRNA vaccine has been widely distributed in response to COVID-19. The mRNA in the vaccine enters cells in the body where the cell machinery can translate the mRNA into the Spike surface protein of the coronavirus. The body recognizes the spike protein as an antigen and produces antibodies against it. When infected with the actual virus later on, the immune system has a base defense system, antibodies, ready to more specifically remove virus.

The vaccine is given as an initial dose and a second dose several weeks later. The recommended wait time has been around four weeks. The time between doses and the amount of mRNA in the vaccine depend on the company. The amount of mRNA varies between 100µg and 30µg. The process of creating the RNA requires several reagents including polymerases and substrates. These molecules need to be removed to have a more effective product. There are also products of this process such as double stranded RNA or truncated RNA that need to be removed as well. The large-scale production of mRNA requires efficient purification in large quantities for research and production purposes. There are several types of purification processes for RNA and more specifically for mRNA.

mRNA can be purified differently than other RNA due to its unique feature, the poly-A tail. The poly-A tail is a string of adenine nucleic acids at the end of the RNA. The poly-A tail serves to keep the RNA stable from degradation and normally allows it to be exported from the nucleus to be translated. One method of mRNA purification uses magnetic beads pre-conjugated to an oligo-dT tail. The string of thymines on the magnetic bead bind the Poly-A tail of the mRNA. The magnetic beads bound to mRNA are placed in a magnetic rack which holds the beads in place using a magnetic field. The rest of the fluid containing unwanted material can be removed safely while the mRNA stays in place. The container of mRNA in new buffer can be removed from the rack. mRNA is dissociated from the beads by optimized buffer conditions. The container can be put on the magnetic rack again to capture the beads, and the mRNA can be saved in a new container.

mRNA purification: learn more in our other sepmag articles!