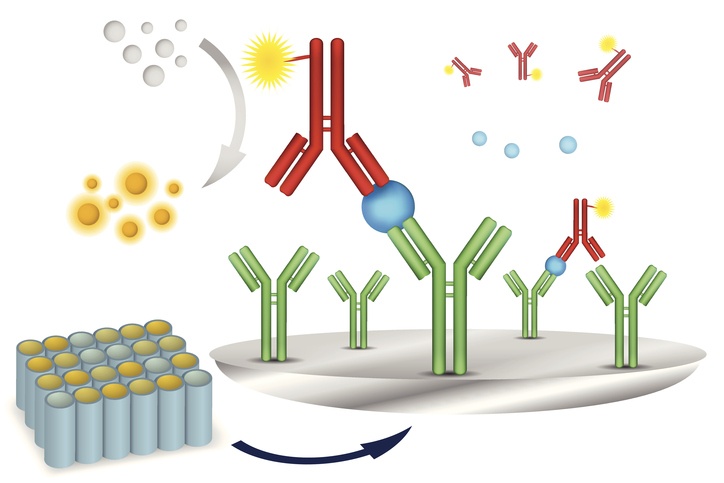 Traditional immunoassays such as the enzyme-linked immunosorbent assay (ELISA) are able to measure the presence or absence of only one analyte per reaction. Multiplex immunoassays measure dozens of different analytes in a single reaction. This is particularly beneficial for precious samples, and when only a small volume is collected for analysis. The multiplex immunoassay also saves working time since multiple assays can be completed simultaneously.

Multiplex immunoassays similar to the ELISA in that they both rely on the specificity of antigen-antibody binding. They also need a detection system. The traditional ELISA relies on an enzymatic reaction while most modern multiplex assays rely on fluorescent probes.

There are two general categories of multiplex immunoassays, and they are divided based on the type of  surface on which the antibodies or antigens are bound.

The bead based multiplex immunoassay requires beads, typically made of polystyrene, that are impregnated with a mixture of red and near-infrared dyes. Manufacturers can create 100 or more uniquely identifiable bead sets by altering the ratio of these dyes. Each analyte to be measured is assigned to a particular bead set, and antibodies are immobilized on the surface. The beads are incubated with the sample for an appropriate time to enable binding between the antibodies and antigens. A secondary probe is also introduced during this incubation period.

A flow cytometer is used for data acquisition. The flow cytometer sends a stream of beads through laser beams one bead at a time. One laser is red and the other is green. The red laser identifies the specific analyte being measured by identifying the unique color of the bead set. The green laser identifies whether or not the secondary probe was conjugated to the bead via the analyte of interest. In the example above, beads conjugated to antigens A and B will fluoresce green, while beads from set C will not.

Other applications for muliplex assays

The fluroescent bead-based multiplex system is also useful for the detection of nucleic acids. In this case, a single strand sequence is covalently attached to the bead surface. This sequence is complementary to the target sequence. The bead is included in a polymerase chain reaction of the sample, and will be extended by DNA polymerase. Some of the bases used by the DNA polymerase are modified to contain a binding site for a fluroescent probe. The presence of the target sequence is therefore indirectly measured by the multiplex system.

The developers of this bead-based-fluroescent multiplex assay also sell premade kits containing beads conjugated with an array of common targets. If a premade kit doesn’t contain all of the markers to meet your unique experimental goals, it is easy to order a custom-made kit. There is no need for the researcher to conjugate each bead set his or herself. This service makes it quick and easy to perform  multiplex assays on a variety of targets.