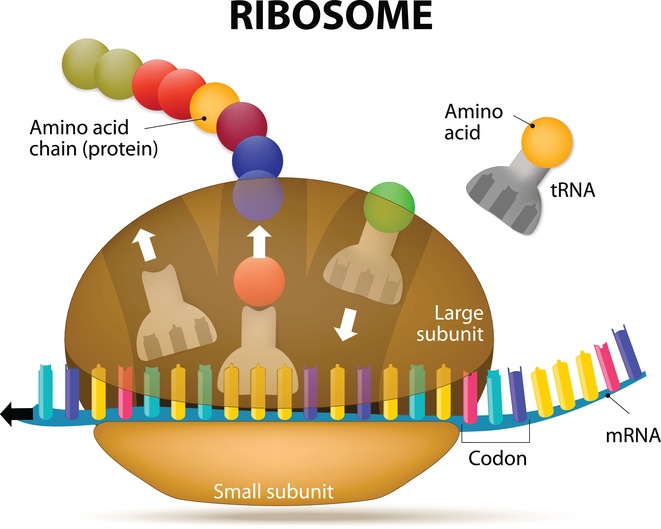 Proteins are constantly being created by the cellular machinery of living organisms. This article will first summarize the process as it occurs in a natural organism, and then discuss how protein expression and purification occurs in a laboratory setting for the generation of recombinant proteins.

Protein expression is a general term used to describe how proteins are synthesized. The process begins with DNA, the genetic code of life. The DNA is a code is written in four bases A,G,T, and C; it is folded within the chromosomes located inside the nucleus of every cell. The amazing thing about protein expression is that the process itself is actually mediated by existing proteins.

Proteins differ from each other in size, structure, and chemistry. These differences result from the order of amino acids in the long strands of polypeptides comprising proteins. There are 20 essential amino acids that comprise protein, and each contains a C-terminus (-COOH), and N-terminus (-NH2), and an identifying side chain (-R group). The side chain is what gives each amino acid, and eventually each protein, its unique chemistry. Following translation, polypeptide strands spontaneously fold into complex three-dimensional structures according to the order of these amino acids and their interactions with each other.

A cascade of chemical signals direct the process of protein expression, and existing proteins mediate the process. The first step is transcription. During transcription, the enzyme RNA polymerase is instructed to synthesize a single strand of mRNA complementary to the template DNA sequence. Once the mRNA is synthesized it can undergo post-transcriptional modification such as polyadenylation, capping, or splicing. The modified mRNA exits the nucleus through a nuclear pore and enters the cytoplasm of prokaryotes or the endoplasmic reticulum of eukaryotes. The mRNA is then translated into a polypeptide by a ribosome with the help of tRNA. The translation of mRNA to a polypeptide of amino acids proceeds by reading one codon at a time, beginning with the start codon. Each codon is a sequnce of three bases that correspond to a specific amino acid. The ribosome reads the codon and adds the corresponding amino acid to the growing polypeptide chain. Once the ribosome encounters a stop codon it releases the finished polypeptide. The polypeptide undergoes post-translational modification before folding into its final form as a finished protein and being released to perform its duty within the organism.

This process of transcription and translation can be harnessed for the production of large quantities of certain proteins needed for medicine or basic research. The cellular machinery (RNA polymerase, ribosomes, etc.) are too complex for humans to engineer a completely synthetic method of transcribing and translating proteins. The best we can do right now is to use the cellular machinery of living cells. To do this we use hybridoma cell lines or clone recombinant DNA into cultures of bacteria or yeast that can generate the proteins for us. A hybridoma is a fusion of rapidly proliferating myeloma cells and antibody-producing plasma cells. Hybridomas are used to generate large amounts of antibodies that have specific antigen-recognition sites. E.Coli and yeast are clonal cells commonly used to generate recombinant proteins from recombinant DNA.

Once the proteins are generated in these laboratory systems they need to be collected and purified. The proteins are extracted from the cell culture via cell lysis. This messy mixture of cellular components and target protein is unsuitable for most applications, so an enriched sample of target protein must be obtained. This is accomplished via a handful of protein purification methods such as size exclusion chromatography, resin or bead-based immunoaffinity chromatography, ion-exchange chromatography, magnetic beads (as GE’s MagSepharose, protein A/G dynabeads or similar products), immunopreciptiation, and tags such as histidine, biotin, or streptavidin.

The natural process of protein extraction is truly a complicated, wonderful process. This is what keeps all living things healthy, alive, and able to reproduce. Our science and our medicine is dependent upon our ability to control protein expression and purification in order to generate large, pure populations of proteins.