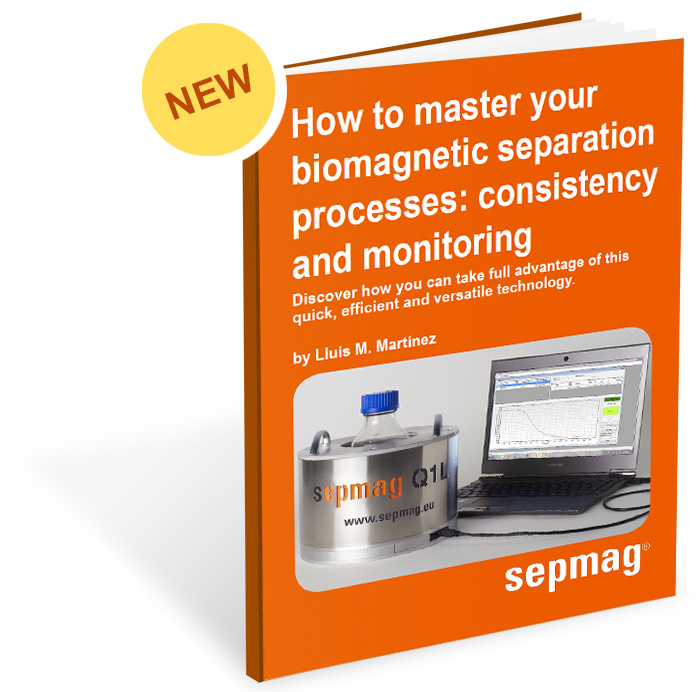 The variation in magnetic force with distance when using classical magnetic separators is rarely problematic at small volumes. The short distance between the farthest beads and the magnet means that even with the mild magnetic forces generated by a small permanent magnet, separation time is fast and the efficiency is high.

These small magnets will not generate excessive retention force then no irreversible aggregation problems are usually detected. However, when scaling up using classical magnetic separators, users experience two problems:

When scaling up biomagnetic separation processes using classical separators, users are often surprised to experience a decrease in bead and biomolecule yield. The results aren't consistent with those at smaller volumes, and this can decrease the economic efficiency of the process.

This drop in yield is largely because the magnetic force decreases rapidly with distance. For larger diameter vessels, the farthest beads need to move a greater distance, but the magnetic force acting on them is exponentially lower. Slower bead movement combined with the greater distance for the beads to travel when using scaled-up volumes, results in very long separation times.

Users can try to resolve this problem by pumping out the supernatant before the separation is completed. But this results in large losses of magnetic beads and the expensive biomolecules attached to them. Another solution is to try to increase the magnetic force where it is lowest - at the farthest point from the magnet. But that means using a much larger magnetic device (with large stray fields – quite dangerous for life sciences laboratories) that exponentially increases the magnetic force on the closest beads and the retention area. This results in the second issue: irreversible aggregation.

When the beads are exposed to high forces over long periods of time, the beads have a higher probability of becoming irreversibly aggregated. Because magnetic force in classical separation devices varies with distance, increasing the force means beads close to the magnet experience extremely high forces over a longer period. Irreversible aggregation occurs when the electrostatic barriers that normally separate the beads are breached, and the beads become cross-linked.

When working at a small scale, users may try to resolve this using more aggressive resuspension techniques, such as ultrasonic baths. Such techniques can be risky: sonicating with excessive energy risks destroying the magnetite nanoparticles – high density material – by removing them from the non-magnetic, low density, matrix. And even if the right energy can be determined (large enough to dissolve the clumps, low enough to avoid magnetite losses), scaling up the process to liters is very complex.

Irreversible aggregation negatively affects within-batch consistency because aliquots for individual kits from the same large volume batch are highly variable as a result. As some beads are exposed to a high magnetic force for a long time, while others are only exposed to a low force, it is difficult to maintain a consistent resulting product. This is especially true if you plan to change the volume to a milliliters or microliters scale for the final application. The solution to this problem is to take a completely new approach to biomagnetic separators.