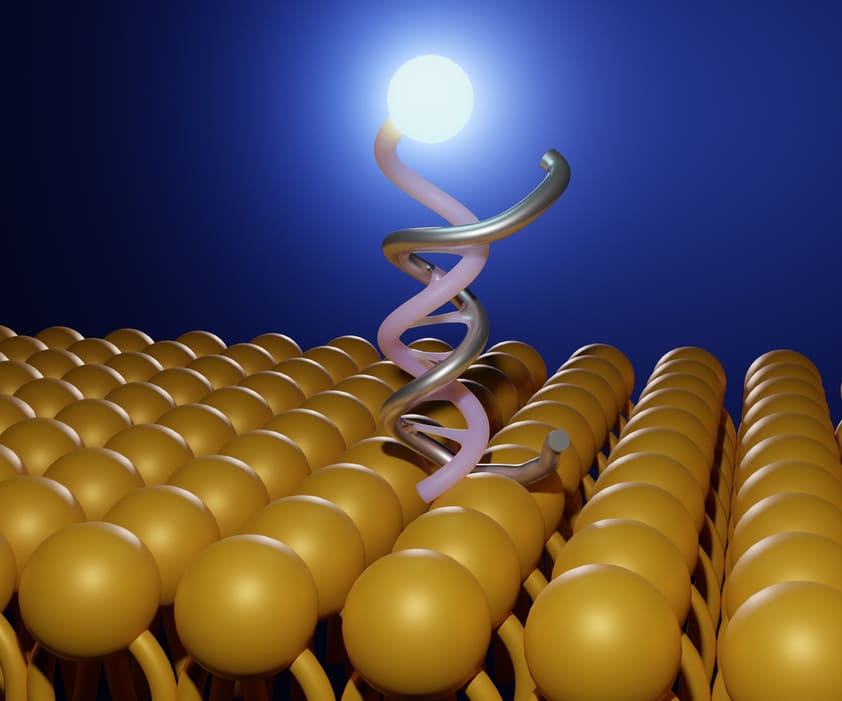 A fluorescent nanoparticle is a small particle containing a fluorophore that can be used to label biological material, such as a specific cell or tissue under fluorescence imaging. There are generally two locations for the particles to probe: ones that bind to the surface and others that bind internally. A large array of different nanoparticles can be used to achieve this, including but not limited to fluorescently doped silicas and sol-gels, hydrogels, hydrophobic organic polymers, and quantum dots. There are currently three main techniques for fluorescent problem.

In the most simple one, a strong fluorophore or fluorescent nanoparticles are internalized into cells so that they can be imaged. The only purpose of such fluorophores and nanomaterials is to render cells or tissue fluorescent. They lack affinity for a specific site, nor do they respond to the presence of chemical species such as certain ions or organic molecules. The second technique is referred to as “targeted bioimaging”. It enables specific domains or species to be detected, very much like immunostaining or fluorescence in situ hybridization. In order to accomplish this, fluorophores or nanoparticles are applied with a functionalized surface. This includes receptors, ligands, antibodies or oligomers that have a binding counterpart. This procedure can be used to target genetic markers, mitochondria, membranes, The third technique is making use of probes and nanomaterials with sensing capability. This enables the probing of chemical composition, such as pH, salinity, oxygen levels, and glucose levels.

Surface modifications of nanoparticles generally serve two purposes. One is the fluorescent tag. It is important to select a fluorescence that is otherwise absent from the biological system. Fluorophores are added either by surface depositing a coating, or via immobilization of a fluorophore on the surface. The second modification serves to ensure biocompatibility or cell-permeability. While these modifications are vast, one such example is the use of coating poly(ethylene glycol), or PEG. Attachment of PEG ensures that nanoparticles are protected from the immune system, allowing measurements in vivo.

Magnetic Resonance imaging (MRI) is a commonly used medical technique for noninvasive imaging of human internal organs without inducing ionizing radiation. Its use is widespread, common, and it has become an essential staple for medical research and diagnostics. Magnetic nanoparticles have recently been introduced to the technique as a means to introduce more contrast change. Iron-oxide nanoparticles, for example, are biocompatible and serve as a useful contrast agent for diagnosis. Cancerous tissue lacks cells that can uptake these nanoparticles, allowing for selective labeling of healthy tissue. Additional use of nanoparticles for MRI are found through antigen-antibody interactions that can label cells or proteins in specific regions.

Some fluorescent nanoparticles are made of organic materials, while others are made of inorganic metal materials. The selection of magnetic materials can have advantages. For example, in some cases, the application of an external magnetic field can alter or activate the fluorophore, allowing for different imaging. In some applications, the application of a magnetic field will induce torque on the magnetic dipole and result in translation, rotation, and even energy dissipation in the form of heat. This has been shown to result in biomarker/cell separation.