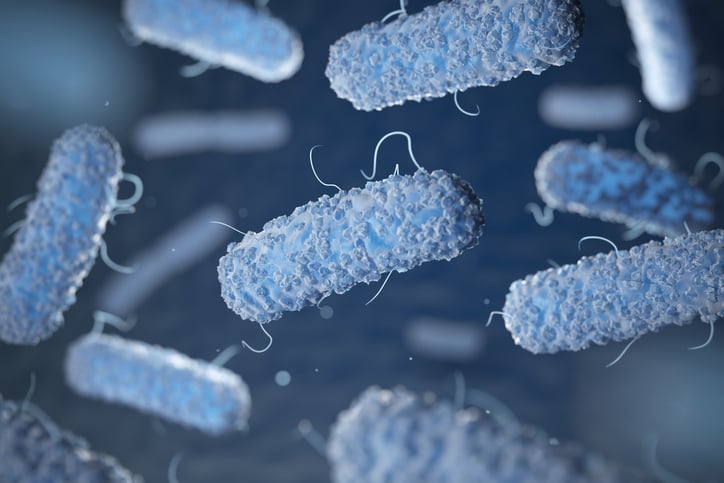 An antigen is defined as anything that causes an immune response in another organism. This immune response can be a simple increase of inflammatory factors, or it can be an activation of the adaptive immune system and creation of antibodies. Antibodies have two or more specific paratopes, or antigen recognition sites, that identify and combat the invading antigen. The number of antigen recognition sites is dependent on the antibody class. The word “antigen” can also refer to any protein of interest detected by a bioassay or biodetection platform. In the case of a bacterial antigen, we are referring to surface proteins, lipopolysaccharides, and peptidoglycans on the bacterial cell wall; these structures help bacteria invade other organisms by gaining access between epithelial cells. While surface structures help bacteria infect other organisms, they are also a detriment to the bacteria because they  also serve as a unique tag that antibodies and bacteriophages can recognize. Bacteriophages are viruses that attack bacteria. Both antibodies and phages are being used by scientists to develop new biodetection and biosensing platforms for rapid detection of bacterial antigens in the environment and in clinical samples.

Bacteria are divided into two broad classes (gram positive and gram negative) defined by the composition of their cell walls. Hans Christian Gram, a Danish bacteriologist, developed the gram stain in 1884. Gram positive bacteria turn red while gram negative bacteria stain purple. Gram positive bacteria have a thick layer of peptidoglycans on the outside of their cell walls, sometimes up to 90% by composition. These peptidoglycans are polymers of sugar and amino acids that form an outer wall mesh structure. Gram negative bacteria have a cell wall that is composed of only about 5-10% peptidoglycan. They have a more complex outer membrane that is a lipid bilayer, integral membrane proteins, and lipid polysaccharides. The lipid polysaccharides generate antibody production by the adaptive immune system in a host organism, and become the identifying feature of the bacterial antigen. Most bacteria, regardless of type, also have hair-like structures such as pili and fimbriae that help the bacterium adhere to host cells and to gain entry in order to infect the host.

Use of bacteriophages in sensing bacteria (Sam Nugen)

Just as bacteria invade an infect the cells of other organisms, bacteria can be invaded by bacteriophages, or phages, which are viruses that specifically gain entry to bacteria and use their cellular machinery to replicate themselves. The newly created phages will eventually lyse the bacterium and escape. At more than 1031 bacteriophages worldwide, they are thought to be the most prevalent entity on earth, and are particularly concentrated in seawater. Bacteriophages inject their genetic material into bacteria by recognizing the lipopolysaccharides, pili, peptidoglycans, proteins and teichoic acids comprising the cell walls and outer membranes of the bacteria. It is known that certain phages specifically recognize only certain bacteria.

A traditional sensing system or bioassay such an ELISA uses uses a bacterium-specific antibody as the capture molecule or probe. The downfall to using antibodies as the sensing layer is that they are very sensitive to temperature and surface attachment strategy and geometry. Bacteriophages have been identified that specifically infect listeria monocytogenes, a common bacterium that can cause food poisoning and prenatal complications. The tail of the bacteriophage has receptor binding proteins that gain access to the bacterial antigen. Once these binding proteins are identified it is possible to produce them as recombinant proteins and integrate them into new biosensor technologies that may potentially have higher sensitivity and a lower limit of detection than current standards.

The role of antibiotics in stopping bacterial infection