Chromatography is a widely used purification technique that utilizes columns filled with molecules chosen to separate your protein of interest. These molecules may be:

Labs that perform many purifications will prefer to use a high performance liquid chromatography machine (HPLC). The HPLC is costly and the procedure can be complicated, but yields good precise results that are typically reproducible. Chromatography purification can also be time consuming because it requires making reagents for each column used and many wash steps.

The process starts with the preparation of the sample, which consists of cell harvesting, cell disruption (in the case our target protein is intracellular), and clarification. Cell harvesting involves separating the cells from the culture medium, usually by centrifugation or filtration. As for the cell disruption, it can be achieved through different methodologies that will be chosen depending on the host. Not all cells demonstrate the same resistance to lysis, and this should be taken into account because more rigorous protocols are needed for the more resistant cells (ex: bacterial cells, due to their cell walls).  The most widely used techniques are chemical methods (such as enzymatic methods or detergents) and physical methods such as sonication.

All methods have advantages and disadvantages, and they can never produce a 100% pure sample. This is why many protein purification techniques are said to produce an “enriched population” of a target protein rather than a pure population. Due to this, we tend to use combinations of methods, such as, for example, sonication followed by a detergent treatment. Obviously, in the case of preparing a sample of secreted proteins, cell disruption will not be needed and one step will be eliminated.

The last preparation step is the clarification, which is needed because the protein to be purified will be mixed with other elements such as membrane remains, organelles, cellular debris or insoluble proteins. This is achieved by filtration or centrifugation, which uses centrifugal force to separate the liquid fraction with dissolved soluble molecules from the heavier intact cells. The goal is to obtain a clean medium of particulates, which will allow us to carry out the separation itself. It is during these steps that we try to decrease the working volume in order to deal with more manageable volumes. However, as is often the case in industrial scenarios, the volume needs to be scaled up in order to increase production. The scaling-up process can be a tricky one as large volumes of proteins and cells can behave differently than small volumes. This is particularly true when biomagnetic separation is used in the next step, the capture step. 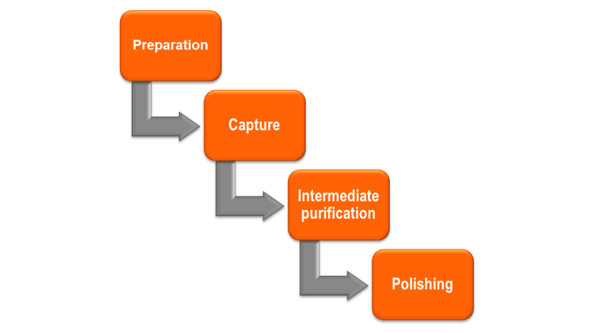 Isolating the protein in the capture step

The next purification step is recovery or capture, which has as a goal to isolate, concentrate and stabilize the protein of interest. Always preserving its functionality, the protein is concentrated and the most important contaminants are eliminated. This step functions as a simple and fast initial purification that will be refined later, although a high level of purity can be obtained with very specific methods.

As discussed before, affinity chromatography is, currently, the most common method for purifying recombinant proteins. We should also consider magnetic bead separation, which provides many advantages in regards to chromatography and assumes a general simplification of the process. In case of using less specific methods, an intermediate purification may occur in order to separate the protein of interest from the contaminants that linger after the clarification.

The last step is polishing, although it overlaps a little with the purification and it’s not always needed. This step consists of eliminating as much of the impurities as possible, performing more chromatographies, or eliminating some elements used in the chromatography that are not needed (or even undesired) in the final product. We can do a dialysis or change the buffer in order to have the already purified final protein in adequate conditions, such as pH or salinity. Polishing is done or not depending on the desired purity grade and on the acceptable efforts to be put into the process. As already discussed, this will depend on the use of the purified protein.

Did you find this post interesting? You can check this related post in order to learn more about protein purification steps: 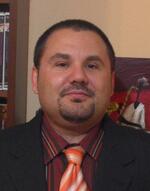 Dr. José L- Corchero graduated in Biology in 1990. After that, he obtained a Master Degree (1993) in Biotechnology and a PhD (1997) in Biological Sciences. Since then, he has worked in the Center for Disease Control and Prevention (Atlanta) and in the R+D section of Biokit SA. He is currently a senior scientist of CIBER-BBN (Networking on Bioengineering, Biomaterials and Nanomedicine) in the Universitat Autònoma de Barcelona. His current research mainly deals with production of therapeutic proteins for rare diseases and the development of new vehicles for the targeted delivery of such proteins.