Optical monitoring of Biomagnetic Separation: how to parameterize the process

Validation is a mandatory requirement at IVD-kits manufacturing. The lot-to-lot consistency is critical to assure consistent results when the reagents are used in the analyzers. The key to have an efficient and cost-effective QC protocol would be having the right number of test points, and whatever possible, use existing techniques not requiring intensive use of manpower.

Any change of the properties of the magnetic beads (diameter, magnetic charge), the buffer (viscosity, ionicity, beads concentration) would affect the separation behavior. Any deviation from the expected curve can be used as an alarm. It would allow stopping the batch before incurring in additional costs and/or make the corrective actions when possible.

The importance of having well-defined conditions

If the Biomagnetic Separation System has well-defined conditions (i.e. homogenous force), the recorded curves will not only indicate that something is wrong, but also help identify the specific problem. When using a constant magnetic force in all the working volumes, the opacity versus time curve typically has a sigmoidal shape. The curve can be parameterized just by the two values that define this curve: the exponent p and the time t50.The first reflects the ‘steepness’ of the curve and the second reflects the time it takes to reach 50% of the difference between the maximum and minimal opacity. These two parameters change on a different way depending on what different magnetic bead (diameter, % magnetic content, magnetic material) or the suspension (buffer viscosity, beads concentration, ionicity) characteristics vary. 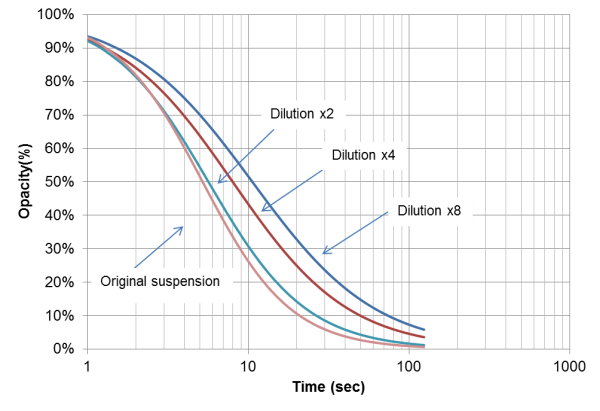 On a typical example, the changes in the concentration would affect the curves modifying both the exponent p and the t50. The biomagnetic separation is a cooperative behavior where the beads interact between them through magnetic dipolar interaction (overcoming the thermal agitation). The higher the concentration the nearer the magnetic beads would be to the nearest neighbor. As a consequence, diluting the sample slows down the separation. This behavior is reflected in the transparency changes by a lower is p (the curve is less ‘stepper’) and a higher t50 (slower separation) for diluted samples when compared with the original suspension.

The parameterization of the opacity, describing the separation behavior by just two their t50 and the exponent p, provides a powerful tool for objective comparison between processes. It can be used for Quality Control purposes, comparing each single batch values of t50 and p with the references. But also it can be used for R&D, analyzing the evolution of the parameters when the product is modified. At difference of using just the separation time as reference, analyzing the t50 and the steepness p give a deeper insight on the suspension behavior during all the process.