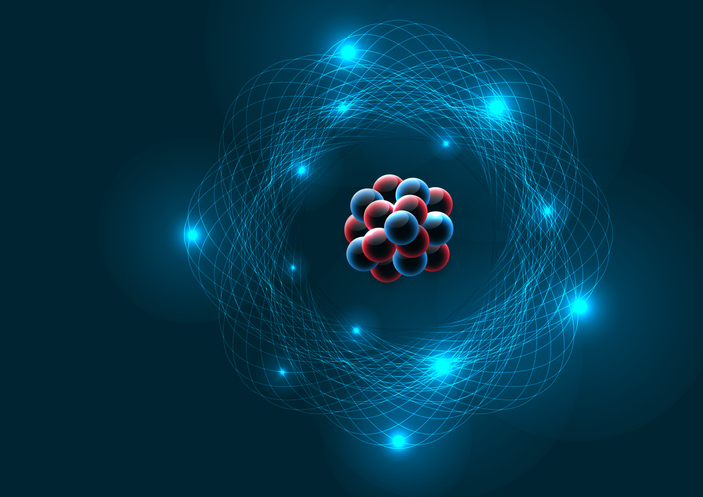 Fluorescence is the release of energy in the form of light as an electron relaxes from a higher energy orbital down to a lower energy. The electron is initially promoted to this high energy state by an incident photon. Therefore, incident light is necessary to achieve the phenomenon of fluorescence, and this light needs to have an energy that is similar to the energy difference between the excited and ground state electron orbitals. Not all molecules are fluorescent; the majority of molecules that display fluorescence upon exposure to visible light are planar, pi-conjugated, alternating single- and double-bonded carbon structures. These structures form resonance hybrids in which the electrons are delocalized from individual atoms and occupy the pi-orbitals above and below the plane of the carbon backbone. Since these electrons are delocalized away from the nuclei of the carbon atoms, they require less input energy to be excited to a higher energy state.

Fluorescent microspheres used for tracing or labeling are impregnated with visible fluorescent dye, which means that the wavelengths of absorbed and emitted light are within the visible part of the electromagnetic spectrum: 400 nm (blue) to 700nm (red). These fluorochromes are planar, pi bonded, aromatic molecules whose delocalized electrons require low enough excitation energy that visible light is sufficient to promote the electrons from the ground state to the excited state. When the excited electrons relax back down to the ground state they release the excess energy as light within the visible spectrum. Once the high energy electron relaxes it will emit light in a packet of energy, which we observe as a particular wavelength of light, or color. The blue and green fluorochromes require higher energy (lower wavelength) visible light than the red fluorochromes.

When the electrons are in the excited state they don’t always fall back directly to the ground state. Excited electrons can drop into the lowest vibrational energy of the excited state, they can undergo internal conversion to the triplet state, from which they can either return to the ground state and still participate in the cycle, or they chemically interact with the environment and are lost from the fluroescence cycle (photobleached). If the conjugated, pi-bonded, structure is disturbed by the opening of an aromatic ring or the breakage of a double bond, then the electrons will require a greater amount of energy to move to the excited energy state. If the electrons are not promoted to a higher energy level, then they can’t relax back down, and they are no longer able to emit fluorescent light. Photobleaching is the process of breaking the cycle of electrons from ground state the excited state and back again.

One pathway of photobleaching involves reactions with ambient oxygen. One method to prevent photobleaching involves preventing oxygen from accessing the fluorochromes. Another method is to design synthetic flurochromes that are chemically more stable and less susceptible to bond-breakage. Commercially available fluroescent microspheres combine both of these methods. Newer, more stable fluorescent dyes are embedded into a polymer matrix at a high density that protects interior dyes from environmental reactions and photobleaching. Therefore, the stability and density of the fluroescent microspheres makes them a reliable and useful tool from the benchtop to the clinic.