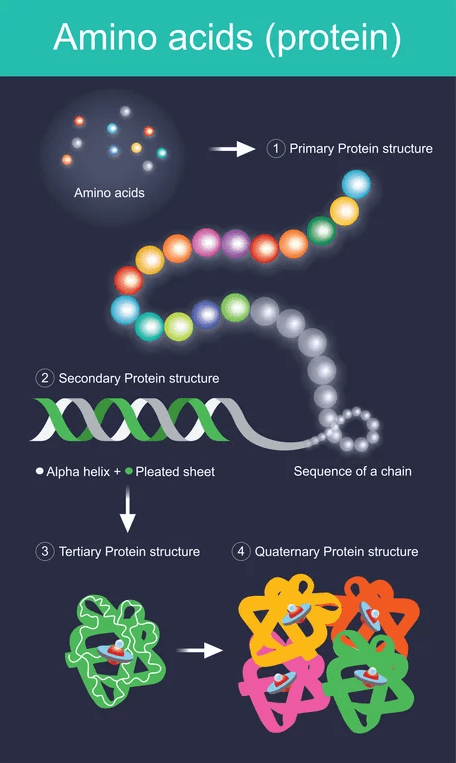 Proteins are fundamental building blocks for life. All tissues and organisms are made up of protein, and all of the work performed inside and outside of cells is mediated by protein signaling cascades. Proteins are polymers of amino acids with three or four layers of organized structure. Primary structure is defined as the linear order of amino acids. This is dictated by the genome: the code is transcribed from DNA and translated into the string of amino acids. Secondary structure is thought of as two basic forms: a beta sheet or alpha helix. The string of amino acids adopts the conformation that allows the lowest energy state. Beyond the sheets and helices, the chain can take other twists and turns to fold into a shape known as its tertiary structure. Some proteins are actually made up of two or more subunits of individually folded amino acids strands. The complexing of protein subunits to form one functional protein is called quaternary structure. All of this folding is extremely important to the character and function of each individual protein because it results in certain side chains of amino acids being located on the exterior or interior of the protein. Importantly, the folds create binding pockets where key amino acids are located to create a unique chemical landscape that allows the protein to bind to other proteins and carry out its job in a signaling cascade.

The importance of protein extraction buffer

The choice of protein extraction buffer is intimately tied with the goal of the protein extraction. The most important question to answer is whether or not the proteins need to be extracted in their native conformations or not. Proteins need to be maintained in their native conformations in co-precipitation assays, where the goal is to study protein-protein interactions. It is important to maintain protein structure when isolating recombinant proteins for further use in sensing or diagnostic work. Similarly, it is also important to maintain the native structure of proteins that will be used in enzyme-linked immunosorbant assays (ELISAs) since maintaining structure is imperative to maintaining function. One example of a time when denaturing the proteins is not a problem is when they will be run on a gel to determine size. In this case it is actually good to denature the proteins to ensure that higher-order structure doesn’t create drag force and interfere with the proteins velocity through the gel.

Protein extraction buffers that cause denaturation of proteins and loss of higher order structure are generally high or low in pH and/or have high salt concentrations. These conditions are best to be avoided when attempting to extract proteins in their native conformations. It is possible to reverse protein denaturation to some degree by first removing the denaturing buffer and then adjusting the redox environment via the addition of polyethylene glycol (PEG), dithiothreitol (DTT), reduced glutathione (GSH), or oxidized glutathione (GSSG). Some proteins will respond well to this treatment, but others will be permanently damaged by the denaturing conditions and will refold improperly and fail to regain their native function.

When proteins are being isolated from cells it is important to use a cell lysis buffer containing detergents to help break apart the lipid cell membrane. Detergents can also help to stabilize and solubilize proteins as they are released from the cell. Other additives are used in the protein extraction buffer to maintain the ionic strength of the system, stabilize proteins, solubilize proteins, reduce oxidative damage, and to scavenge metal ions that could damage the proteins. Examples of additives include salt, glycerol, glucose, EDTA, DTT, 2-mercaptoethanol, and detergents like Triton X-100. It is important to only use additives when necessary.