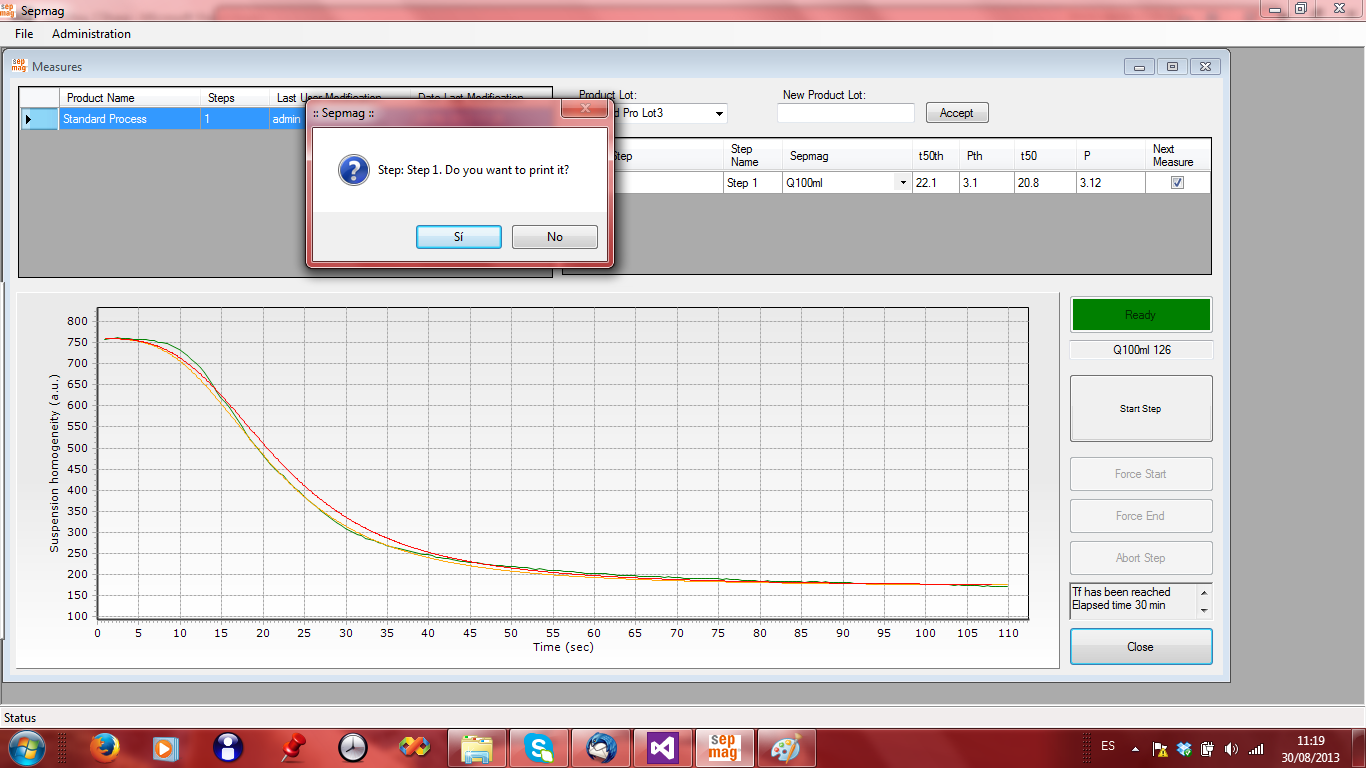 Biomagnetic Separation has numerous applications in Life Science. From cell sorting to molecular diagnostics, this technology can be used with volumes ranging from a few nanoliters (lab-on-chip) to tens of liters (production of IVD-reagents).

To control the process, technicians rely on the fact that the magnetic bead suspension is usually dark. During the separation process, the solid phase moves to the retention area and the buffer becomes transparent. This makes it clear when the process has finished either by sight or, when more precision is required, using a spectrometer.

The main limitation of these approaches is that they only allow analysis of the final result, telling us whether the separation is complete after a given time. A visual inspection provides no information about what happened during the process and it is not possible to detect a faster-than-expected process if the separation time is fixed.

However, when a biomagnetic separation system with constant magnetic force is used, the information provided by real-time monitoring is far easier to analyze. Because the contribution of the applied field pattern is the same throughout the working volume, magnetic bead dynamics depend directly on magnetic moment and diameter (the latter affects the drag force). Changes in the viscosity of the buffer caused by variations in temperature or composition are clearly visible because the separation speed changes. Continuous monitoring also makes it possible to optimize protocols with curves that can be extrapolated and the results can be extrapolated to different concentrations and the interaction between the beads can be studied.

When the biomagnetic separation process is transferred from the R&D laboratory to the production facilities, Quality Control becomes a major concern. Validation of the process conditions is the first issue, but when a homogenous magnetic force is used this is not a problem. Once the value of the force has been tested in R&D or during the validation stage, the production system is given similar values to guarantee that there are no losses or irreversible aggregation problems.

With constant force systems, the separation time can be adapted to the new vessel diameter. Given that the speed is proportional to the magnetic force, the time needed for the farthest beads to reach the retention area is t=distance/speed.

However, in production processes, use of the separation time alone involves a risk of approving faster batches than those validated, because the suspension transparency will be correct at the separation time. For example, if magnetic beads are aggregated before starting the separation, the batch might appear to be correct, but the resulting product would cause quality issues in subsequent steps of the manufacturing process.

When the separation process is monitored, the situation is different. Among the quality issues detectable through real time monitoring are bead aggregation, incorrect concentration, variations in bead diameter and magnetic charge, buffer viscosity changes (caused by incorrect composition or by differing temperatures). 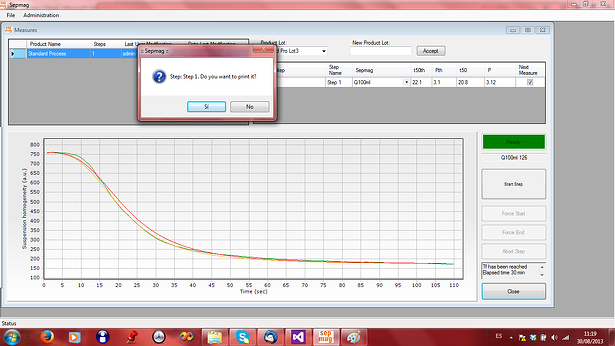 Even if biomagnetic separation users have not traditionally monitored the process, they are important reasons for doing so at both R&D and production level. In the past, the main constraint on monitoring was the lack of controlled conditions for the process. Using advanced biomagnetic separation systems with a constant force throughout the working volume overcomes this limitation and makes it possible to benefit from the information provided by real-time monitoring.

The standard method for developing and validating biomagnetic separation processes is sampling the supernatant at different times. This sample is usually measured using a spectrophotometer. Bead concentration is determined by selecting the right wavelength to avoid interferences with the biomolecules presents in the buffer and comparing it with a calibration curve. The separation time is selected when the number of beads approaches zero. Magnetic susceptibility using the fundamental frequency or some of its harmonics has recently been proposed as alternative.

One of the problems with these approaches involves the sampling method, because the concentration differs at different points of the working volume. How and from where the sample should be taken is a controversial question.

Obtaining real-time information about the entire working volume (ml at the laboratory, liters at production) is a suitable option for checking the evolution of the process. To achieve this goal without interfering with the biomagnetic separation process, optical measurements seem to be a better candidate than magnetic techniques.

The starting suspension, in which the magnetic beads are homogenously distributed, is opaque (unless concentration is very low), however when the solid phase is separated, the buffer becomes transparent. Measuring the light transmitted through the vessel gives a real-time measurement of the evolution of the biomagnetic separation process. When constant magnetic force is used, the beads move radially from the center, so that measuring transmitted light gives a good picture of the process evolution.

This method can be used with different wave lengths, using spectrophotometry if necessary. It is likely to improveaccuracy, however, the system needs to be tailored to the bead/particle and suspension. The correct wavelength for a 50 nm magnetic particle is not the same as that for a 1 micron magnetic bead. A simpler approach, measuring white light transmittance, has proven effective for a wide range of diameters and buffers.

Using the constant magnetic force of Advanced Biomagnetic Systems makes it simple to optically monitor the evolution of the process. Also, as you will see in later chapters, these systems make it easy to interpret the information obtained and use it to obtain information about the process and/or control its performance.

Remember to download The basic guide for Monitoring Biomagnetic Separation processes in order to learn much more about this useful technique: