The last two decades have seen an explosive growth in the use of magnetic beads in Life Science, with sustained double figure sales increase all across the industry. The main driver of this success has been the use of magnetic beads as a solid phase on Chemiluminescence Immunoassays (CLIA) kits. Thanks to its easy automation, this technique has become the preferred choice for high throughput In Vitro Diagnostic.

The commercial success of CLIA analyzers has forced the IVD-kit manufacturers (and magnetic beads manufacturers) to ramp production for coping with the demand. The early strategy was to increase the number of lots by keeping them at the same volume and maintaining the same operational procedures. The problem with this approach, however, is that it needs a proportional increase of highly skilled workers. In addition to that, strict quality controls would be needed to ensure that each single lot falls within the acceptable range of functionality and yields. Producing 100 lots of 100 ml for getting a total of 10 L of magnetic bead suspension needs to prove that each single 100 ml lot is equivalent for guarantee that each single IVD-kit falls inside the accepted tolerances. The high costs of this approach force manufacturers to explore simpler and cost-effective ways to cope with the increasing demand.

The alternative approach is to keep the number of batches almost constant but increase the volume per batch. Increasing the lot volume allows companies to maintain labor and QC costs. If correctly implemented, the repercussion of labor and QC on the individual kits will decrease proportionally to the batch volume. However, in order to succeed, you will need in-lot consistency that makes every single aliquot (usually below 1 ml) compliant with the required tolerances. Scaling-up Biomagnetic Separation processes is not just simply using a bigger magnet. It is far more complicated. In this asrticle and the following ones we will provide you the best tips to make this process a less complicated one.

Have a right start to Scale-up

Developing magnetic beads based products is a long process. For a diagnostic kit, a protein purification product or a new application, it's necessary to select the right biomarker, the coating surface and the magnetic bead. These three aspects are usually checked with great detail while looking for the right characteristics and protocols. Unfortunately, many times, little attention is paid to the biomagnetic separation process itself. In most cases, all the development is performed using the available small volume magnetic separator or, sometimes, just a small magnet. 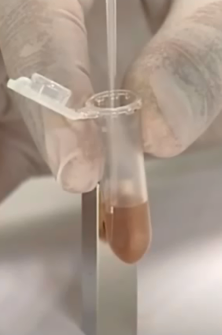 If the development is smooth, the magnetic separators seem to be an unimportant issue. The problems usually appear when the volume of the experiments needs to be scaled up from the usual few milliliters to the tenths of liters. The results seem to be inconsistent when the scale changes, losses increase, attempts of using ‘bigger magnets’ lead to irreversible aggregation problems, and re-suspension becomes a nightmare. These problems are also present at the initial scale, but they tend to be attributed to the lack of performance of the biomarker or the magnetic bead.

The truth is that, in many cases, the problem is on the magnetic separator itself. Developers have paid great attention to specify the characteristics of the antibody/protein, bead size and magnetic content, surface properties, temperature and composition of the incubation buffer. But not to the biomagnetic separation process itself. In most of the cases, the only specified parameter for the process is the separation time for the specific device used.

How to Monitor Scaling-up Process

The consistency of a lot is usually determined at the end of the manufacturing process, checking the functional properties of the product, as it can be the RLU in CLIA kits.

The second flaw is the subjectivity of the measurement. Two different persons may have different visual criteria for considering the ‘transparency’ achieved, leading to a higher variability for the acceptance of the batch, thus increasing the variability on the resultant product.

If it is a problem on the batch, it would probably not be detected until the latest steps of the process. But then, it would be difficult to determine at which step the problem occurred.

The ideal situation would be to monitor the whole biomagnetic separation process. Since the suspension is dark when homogeneous (before separation) but becomes transparent when the solid phase has been separated, we can record the optical changes during the process. The resulting curves can be used as an objective record of each single lot.

When the biomagnetic separation process is performed using advanced systems, the magnetic force is constant and the field pattern generated by permanent magnets. Using these conditions, changes in the behavior would be directly related to changes in the suspension, and the sigmoidal-like curves can be used as quality control. If the magnetic beads are irreversible aggregated in one separation step, in the next separation step would show faster separation than expected. In the example, the optical monitoring of two sequential washing steps reveals that the second one (lighter curve) shows a different behavior. A naked-eyed observation would probably give a ‘pass’ status, as both processes had achieved whole transparency at the separation time (115 seconds in the example). The sigmoidal curve, by contrast, quantifies the difference as the reduction of the t50% (when 50% of the transparency is achieved) from 37 to 22 seconds. This big difference should rising an early quality alert, but also gives us some clues about the problem cause: magnetic beads move faster when the diameter is larger (concentration also can lead to quicker movement, but would also change the shape). As in the example the beads are the same –no new beads have been added between the washing steps-, the ‘apparent’ diameter increase is probably caused by irreversible aggregates acting ‘bigger’ beads.

For each process step, standard curves can be generated (defined by the expected sigmoidal shape). The transparency curve of every single biomagnetic separation step can then be compared with its standard. Thus, technicians have a powerful tool to detect if something is wrong during the separation process: wrong magnetic beads diameter/magnetic charge, incorrect beads concentration, problems with buffer viscosity.

The transparency curves also provide the production team and the QC-manager with an audit tool to objectively discuss and review the issue on the process, saving time, money and discussions. The alerts generated by deviation from the biomagnetic separation standard curves permits earlier corrective actions or, if necessary, discard the batch. For large volume production that means big savings on the unnecessary wasted resources (antibodies, buffer, magnetic beads…) dedicated until final QC detects the problem, but also using the time saved to complete the production on time or with minimal delays. Moreover, all this benefits can be obtained at no cost, as monitoring option is included in all the advanced biomagnetic separation systems.