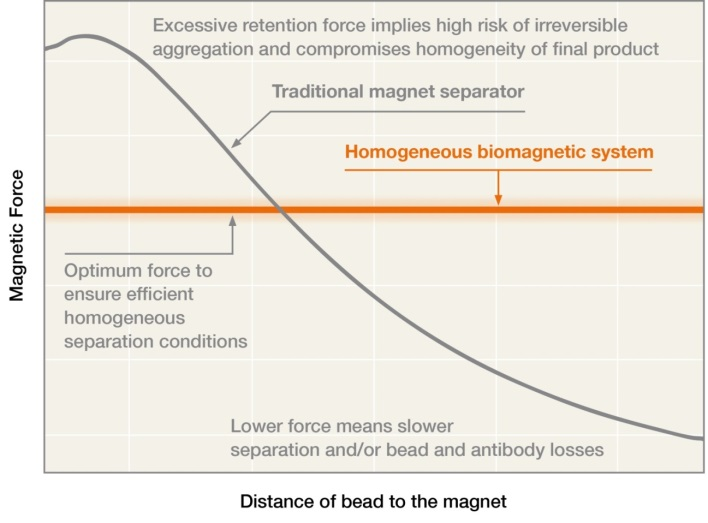 How to Select the Right Biomagnetic Separation Conditions

To scale-up a Biomagnetic Separation process, selecting the correct working conditions is beyond paramount. Almost any set of conditions may appear to work well enough at very small volume. Classical magnetic separators generate inhomogeneous magnetic force, having some beads magnetically saturated on regions near the retention areas and non-saturated beads in the rest of the working volume. For tubes of one milliliter or less the separation may apparently seems working fine, as the irreversible aggregation problem would not be noticed, the separation time is short and the magnetic beads losses not appreciable.

However, when the volume scales-up to hundreds of milliliters or liters, the problems (high losses despite long separation times, irreversible aggregation of the beads) become evident. To avoid these unpleasant surprises it is very important to select the right biomagnetic separation conditions at the early steps of the project.

The best way to keep consistency at different volumes is to validate the process using homogenous magnetic force, i.e. having all the beads in the same biomagnetic separation. For this we need to fulfill two conditions: a constant magnetic field gradient and, simultaneously, a field big enough to saturate the magnetic beads. On this way, the process is defined by the field profile (the gradient value) and the conditions can easily be scaled-up. 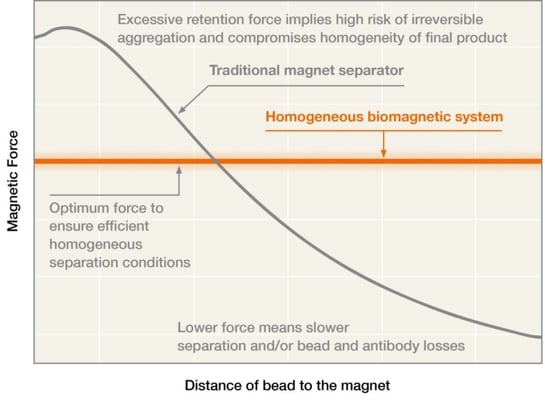 Note that the exact force value would depend on the bead magnetic moment, thus the optimal value of the gradient would be different for small magnetic beads or for bigger one. The force should be big enough to retain the beads when the supernatant is extracted, but gentle enough to avoid irreversible aggregation.

With this approach, all the magnetic beads in the working volume would experience the same force, regardless their initial position. Moreover, the separation time is shorter compared with classical separators, as the farthest beads experience a much higher force (remember: separation speed is proportional to the magnetic force)

If the force is kept constant when the process is scaled-up, the separation speed would be the same. Thus, the separation time will scale proportional to the distance travelled by the farthest magnetic bead. The only potential concern would be if increasing the time nearest beads would be retained can generate irreversible aggregation. As the retention force is gentler than in classical separators, the probability is almost zero. The effect of longer separation times can easily be experimentally assessed at small volume: extracting the supernatant can be performed not when the separation is complete, but delayed until the estimated separation time at large volume. As the magnetic beads experience the same force during the same time in both volumes, this simple experiment may reassure about the lack of irreversible aggregation problems before investing in the large volume equipment.

Selecting the biomagnetic conditions as described (homogenous magnetic force), the problem of scaling-up the process disappear. The behavior of the magnetic beads would be the same, regardless the working volume, as the conditions are well defined. In consequence, we can correctly validate the process at small scale and transfer to larger scale without more worries to reproduce the defined conditions