Flow Cytometry Interpretation: how to know what your results mean

Flow cytometry interpretation can be challenging, particularly when conducting multiparametric analyses that typically create a large quantity of data points. Fluorescent activated cell sorting (FACS), a derivative of flow cytometry, has become an essential tool for modern life science and biomedical laboratories. It is one of two main methods for cell sorting, alongside magnetic bead separation. FACS is a method for rapidly analyzing cells based on multiple criteria simultaneously, and then physically sorting them based on this analysis. The results of the process are usually represented by dot plots: two or three-dimensional scatter plots, or sometimes a histogram. However, these plots can be tricky to interpret, so here are a few tips to help get you started.

How does flow cytometry work?

Fluorescence activated cell sorting, a type of flow cytometry, identifies cells in a mixture that have the characteristics that you are interested in, and then physically sorts them into separate populations. It does this by using antibodies to label cell surface proteins with fluorescent tags, called fluorophores. Droplets of the mixture are then channeled down through a funnel, which are analyzed by a laser as they fall through its beam. 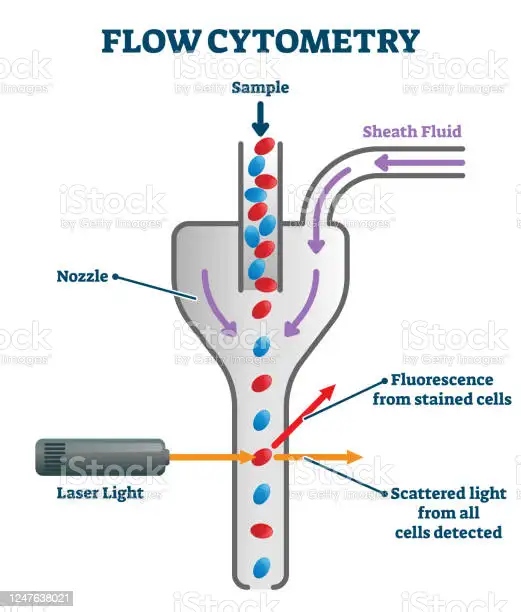 If the droplet contains a cell that has been labeled with a fluorescent tag that corresponds to the type of beam used, the signal it emits when excited by the laser can be detected and analyzed. The machine then uses this information to sort cells into enriched populations, for example by sorting all cells with a green fluorescent signal from those with no signal.

In FACS, each wavelength of fluorescence emission that is emitted by tagged cells as they pass through the beam of a compatible laser is detected and recorded as a distinct data point on the final plots. The intensity of each ‘signal’ emitted by a fluorophore is also recorded, and is plotted on the scatter plot or histogram, usually on a logarithmic or bi-exponential ‘logicle’ scale. Signals with a similar intensity therefore cluster together as data points on these plots, with each fluorophore signal represented by a single dot. This can make reading these plots challenging, so what can you do to make your flow cytometry interpretation process easier?

Each fluorescent and other emitted light signal detected during FACS is assigned to its own ‘channel’ (parameter). However, if these signals aren’t correctly isolated, errors where one kind of signal is incorrectly registered as another kind of signal can occur, giving a false positive result for the mistakenly registered signal and associated molecule. This spectra overlap can happen when one fluorescent tag can be excited by the laser beam responsible for detecting a different tag, due to certain properties of its emissions on the light spectrum and its brightness. Signal compensation is a technique that can help to overcome this problem.

Compensation is the process of teaching the FACS instrument which fluorophores to identify as a positive or negative signal. This process reduces the overlap of signals between fluorescent tags with similar emission spectra, and also reduces background noise in the data by clearly identifying which signal intensities are a positive result and which are negative. This process is carried out by the FACS user and requires single color controls, i.e., cells labeled with only one fluorophore at a time. These cells are then run through the instrument and the fluorescence intensity is recorded. The user then defines the cutoff between positive and negative intensity. This requires detailed knowledge of the labeling strategy and fluorophores used.

Another strategy is to create fluorescence minus one (FMO) controls that contain all fluorophores other than the one being compensated for. Proper compensation leads to clean FACS data and makes flow cytometry interpretation much simpler.

Flow cytometry data can be displayed in a variety of ways, and this can have a big impact on your interpretation of the results. Histograms are more common when only one variable is being considered, whereas multicolor dot plots can display multivariate data where density of points shows the frequency of the corresponding fluorescent signal being recorded. However, the scale used in these plots can have a big impact on your ability to interpret the data.

When logarithmic plots are used for assessing the compensation process it can lead to error and confusion. This is because, on a logarithmic plot, negative cells are plotted very close to the axes and are often difficult to see in comparison to the positive cells. It is also hard to see that a population of negative cells is similar in size to a population of positive cells if they are all clustered on the axis lines. Using a logicle plot helps to solve this problem.

The logicle plot is a bi-exponential plot that serves to collect these negative cell data points and plot them clearly around zero. The zero point in a logicle plot is clearly visible and the axes continue to values below zero. This brings this negative population away from the axis lines and into the body of the plot, which allows these negative cells to be clearly displayed as a population. The user is then able to get an accurate impression of the size of the negative population in comparison to the size of the positive population. It also allows users to ‘gate’ their data, which makes the analysis of multiple parameters far easier to interpret.

Gating is a method for selecting cells that you want to analyze in more detail than can be shown on a normal dot plot. It involves defining which cell population the user is interested in on the FACS software based on fluorophore intensity.  This allows a smaller subgroup to be displayed at a higher resolution, and multiple parameters to be analyzed simultaneously. To conduct a gated FACS process, users draw around each subgroup in the dot plot in the associated software. These subgroups will then be highlighted or assigned a color on all of the plots and parameters being considered. Gating can be applied down to a single cell, so users can conduct a deep analysis and get a better understanding of their data.

In addition, while flow cytometry is a powerful and highly precise technique, it can also be prohibitively expensive. Magnetic cell sorting is an alternative bulk cell enrichment method that is highly specific and can enrich multiple cell types in a single run. This method uses superparamagnetic nanoparticles attached to specific antibodies to retain target cells and remove unwanted cells and other materials from a sample. Magnetic separators are cheaper, and this technique is specific and fast with an appropriate sorting strategy. Read our basic guide to magnetic bead cell separation to find out more: